Lee Cheng Yan could have the luxury car forfeited to the state following the hearing in February.

SINGAPORE – A forfeiture hearing for a Maserati driver, whose car dragged a Traffic Police (TP) officer for more than 100m in 2017, has been adjourned to Feb 27.

This after his sister told the court on Wednesday that recalcitrant offender Lee Cheng Yan, 38, had pledged the car to their elderly parents and they were its de facto owners.

It was not said in court when Lee had allegedly pledged the vehicle to his parents. The value of the car was also not mentioned in court.

Lee, who was earlier convicted and sentenced over various offences, including driving while under disqualification, could have the luxury car forfeited to the state following the hearing in February.

Under the Road Traffic Act, in cases of repeat offenders convicted of driving while under disqualification, the court has to order the forfeiture of the vehicle when the prosecution applies for it.

Addressing the court on Wednesday, his sister said the family is supporting his two daughters in Japan.

Stressing that they do not condone his offences, his sister said Lee had taken large loans from their parents to settle his legal fees.

She also told District Judge Kamala Ponnampalam that their mother had pawned her jewellery to raise money to help Lee.

The sister added that Lee had pledged the car to their parents to repay his loans, but there were no documents to prove the pledge. "That was with the understanding that he wishes to pay them the moment the car is released... What he did is pledge the car to repay the loans he had taken from (our) parents," she said.

Deputy Public Prosecutor Timotheus Koh had asked for the adjournment so that Lee and his sister could have more time to prepare their submissions on matters involving the possible forfeiture.

The DPP also said checks needed to be made to ascertain if there are credit companies linked to the purchase of the car.

Lee, who is now serving his jail sentence and is not represented by a lawyer, turned up in court in his purple prison outfit.

He told the court he hoped to be given a chance to "claim back" the car. 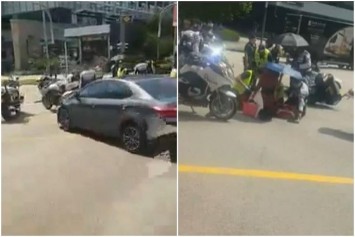 He was earlier dealt with in court over two sets of proceedings.

He was under a driving ban on Nov 17, 2017, when he was stopped by a TP officer in Bedok Reservoir Road for not wearing a seat belt.

While the officer was standing next to the driver's door, Lee suddenly reversed the car, then accelerated forward.

The policeman was dragged along Bedok Reservoir Road when his uniform got caught in the door on the driver's side. When the officer fell onto the road, Lee sped off without helping him.

In July 2020, he was sentenced to four years and seven months' jail and a $3,700 fine on multiple charges, including voluntarily causing grievous hurt to a TP officer. He was also given a lifetime driving ban.

While Lee was on bail pending his appeal against his conviction and sentence, he repeatedly drove a BMW rented by one of his friends.

He was handed more charges for traffic offences. In one incident on March 12, 2021, he drove through a police roadblock, drove dangerously by speeding at 140kmh and ran two red lights.

In January 2022, Lee was sentenced to another jail term of one year, nine months and 16 weeks. He was also ordered to pay a $1,000 penalty over graft charges.

On Jan 18, 2023, he pleaded with a High Court judge to reduce his sentence totalling more than six years.

Lee repeatedly said he was remorseful for what he had done and asked for leniency so that he could reunite with his daughters earlier.

Lee also asked for his car to not be forfeited, saying he wished to use the sales proceeds to provide for his children.

Justice Aedit Abdullah rejected Lee's appeal and chided him for not learning his lesson, adding: "You don't seem to understand the seriousness of what you have done."