Is the slight burning smell in parts of Singapore over the past few days due to haze?

Despite the lingering smell and hazy conditions, air quality remained in the "moderate" range.

SINGAPORE - The smell of something burning is often associated with worsening air quality and transboundary haze, but this may not always be the case, said the National Environment Agency (NEA) on Tuesday (March 2).

It added that such smells could come from a variety of sources, including local and regional fires, and may be more pronounced during certain periods of the day due to weather conditions.

To get a better understanding of air quality and make decisions of whether outdoor activities should be carried out, people should refer to the NEA's website or the haze microsite.

The agency was responding to queries from The Straits Times.

Last Saturday, air quality in the northern parts of Singapore hit unhealthy levels. But this was due to elevated levels of ozone, a type of pollutant which is odourless.

And earlier this week, a burning smell was reported in many parts of Singapore after winds blowing from the north brought in smoke from a hot spot in Johor. However, despite the lingering smell and hazy conditions, air quality remained in the "moderate" range.

Q: How is air quality measured in Singapore?

A: The Pollutant Standards Index (PSI) is used as a gauge of air quality in Singapore.

To derive the PSI, the NEA takes the average concentration levels of each of the six key air pollutants and converts each of them into a pollutant sub-index based on a formula.

The averages are taken over a 24-hour period for PM2.5, particulate matter and sulphur dioxide, an eight-hour period for ozone and carbon monoxide, and one-hour period for nitrogen dioxide. The highest sub-index will be the PSI value for that hour, said the NEA.

During periods of haze caused by forest fires in the region, the dominant pollutant is PM2.5.

The PSI is the only measure of air quality in Singapore pegged to a health advisory. Air quality is considered unhealthy when the PSI is in the range of 101 to 200.

During such periods, healthy people are urged to reduce prolonged or strenuous outdoor physical exertion, while vulnerable groups, including pregnant women, children and the elderly, are advised to minimise such exertion.

When air quality is "moderate" - with PSI readings between 51 and 100 - normal activity can go ahead for all groups.

Q: Should vulnerable people go outside when burning smell can be detected?

A: There is no good correlation between a burning smell in the air and the PSI or PM2.5 concentration levels, said the NEA.

While such smells may at times be accompanied by slightly higher PSI or PM2.5 concentration levels, it may not always be the case.

To help people decide if they should continue with outdoor activities, such as jogging, the NEA introduced the one-hour PM2.5 readings pegged to four bands last year.

Read Also
Thundery showers expected in Singapore for next few days but haze may persist: NEA 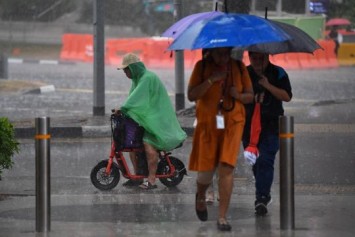 Band 1 PM2.5 readings, referring to PM2.5 concentrations of between 0 and 55 micrograms per cubic metre of air, are normal and all activities can be carried out.

When this reading hits Band 2, PM2.5 concentrations are between 56 and 150 micrograms per cubic metre of air - a concentration considered elevated. People are urged to reduce strenuous outdoor activities for the next hour.

On Tuesday, the hourly concentration of PM2.5 entered Band 2 (Elevated) between 6am and 7am in the east of Singapore before returning to Band 1 (Normal) from 8am that day. However, overall PSI remained in the moderate range.

Q: What are some possible causes of the burning smell and hazy landscapes?

A: The ongoing dry conditions due to the current phase of the north-east monsoon season are causing lower rainfall and warm temperatures.

These conditions are conducive to the development of land and forest fires in neighbouring countries as well as local vegetation fires, said the NEA.

Since the second week of February this year, the Singapore Civil Defence Force (SCDF) has responded to about 30 cases of local vegetation fires.

Read Also
Haze in Singapore: 5 essential items to protect your family from pollution 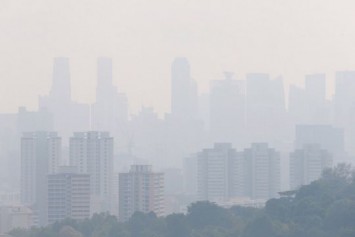 The majority involved small pockets of vegetation around Singapore. The largest fire - spanning the size of about a football field - occurred on Feb 23 along Tembusu Crescent on Jurong Island, said the SCDF.

The NEA said that depending on the direction of the prevailing winds, smoke haze from fires in the region can be blown towards Singapore, giving rise to the occasional burning smell, slight haziness and reduced visibility.

The burning smell tends to be accentuated at night and in the early morning when lighter winds cause an accumulation of particulate matter in the air.

But during the day, winds get stronger and sunlight heating the ground causes air to move upwards and downwards, which helps to disperse the particulate matter.

Q: Is the haze returning soon?

A: Dr Erik Velasco, an expert on air quality, noted that in recent days, the number of hot spots in Riau and Sumatra in Indonesia, and the south provinces of Malaysia have increased a little due to the current dry conditions.

"We are in the tail of the north-east monsoon, thus plumes from Malaysia's wildfires may be triggering such burning smell," said Dr Velasco.

"If the dry conditions continue, we could expect haze events, but fortunately, rain is forecasted for this month."

But before the rain arrives, there could be some light haze in the following days, similar to the slight haziness seen over the past few days, but Dr Velasco does not foresee any severe episodes.