SMRT Trains hauled to court over incident where train rolled over worker's foot, leading to amputation

The rail operator faces a charge of failing to take the necessary measures to ensure the safety and health of its employee at work.

SINGAPORE - SMRT Trains was hauled to court on Tuesday (Feb 8) over a 2018 incident in which a train rolled over a worker's foot that later had to be amputated.

A representative from the rail operator appeared before a district court to face the single charge under the Workplace Safety and Health Act of failing to take the necessary measures to ensure the safety and health of its employee at work.

According to court documents, on or before Dec 12, 2018, the rail operator is said to have failed to carry out a risk assessment and set out safe work procedures in relation to the "limited movement procedure".

It is also accused of failing to implement the relevant control measures and carry out safe work procedures to address the risks involved in the operations, as well as failing to provide adequate work equipment such as walkie-talkies and other communication devices.

SMRT Trains is scheduled to be in court next on March 8.

Its parent company SMRT Corp said in December 2018 that the incident occurred on the eastbound track near Joo Koon MRT station, before service hours.

A six-member maintenance team was conducting a brake test on a maintenance train before moving it back to the depot.

The test involves "limited movement of the maintenance train", said the rail operator. 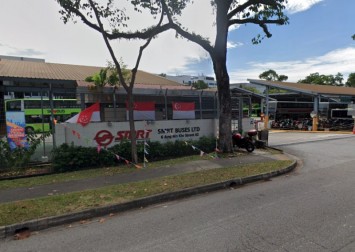 Meanwhile, a worker was on the track to inspect for oil leaks from the maintenance train. An oil spill on the track affects the safety of train operations in the day, said SMRT.

It said: "The brake test was stopped immediately when one of the team members spotted the injured staff lying on the track.

"The rest of the team went forward to provide first aid to the injured staff (member) whose right foot had been rolled over by the maintenance train."

The Singapore Civil Defence Force was called, and the injured worker was taken to a hospital where the lower part of his right leg was amputated.

The Straits Times reported then that the worker was believed to have been a 59-year-old SMRT veteran.

After the incident, a "safety timeout" - referring to a temporary halt to maintenance work - was put in place and a board of inquiry was convened.