Prices of food may have risen, but that's no deterrent for one woman in Sengkang who was captured on CCTV forcefully throwing eggs at a resident's front door.

This happened not just once but twice in a span of a month, according to an anonymous submission to Instagram account Adminsgfollowsalll by a resident of the affected unit.

The resident, believed to be a student, recounted that the first egging incident occurred at close to midnight on July 11. And while the TV was on at the time, the resident shared that the volume was "not loud".

"I heard a loud thud on my door. So naturally, I went to check, and when I opened my door, there was an egg splattered on my door and all over my floor right at the door step," the resident wrote.

According to CCTV footage obtained by the resident from a neighbour, a woman wearing a yellow T-shirt could be seen exiting the stairwell at 11.47pm that evening. She swiftly threw an egg at the resident's door before calmly leaving.

In the post, the resident expressed shock and confusion as the family had never seen the woman in the footage nor spoken to her.

"The policemen just told us to call them if it happens again and left," wrote the resident.

The woman reappeared at their door two weeks later, this time armed with more 'ammunition'.

In a video captured on July 29 at 7.22am, the woman could be seen taking aim at the resident's door almost immediately after emerging from the stairwell.

Read Also
'We try to avoid walking past that area': Residents of HDB block steered clear of woman who harassed next-door neighbour 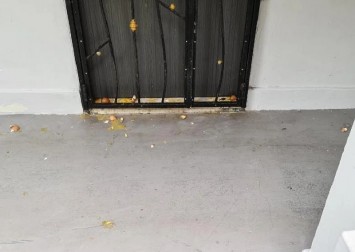 Wrote the resident: "I had just closed my door and left for school [when] my parents heard several loud thuds on the door and were shocked when they opened the door and the same thing happened."

The aftermath? An eggy mess on the floor that took the residents "about two hours" to clean. The resident noted that the electronic lock on their door had also been slightly damaged as a result.

"This incident has really caused so much mental stress on my parents as they had to clean the floor and door for about two hours and the smell is still there," said the resident.

They were told by a neighbour that the woman lives one floor below but not directly under their unit.

This time around, the resident said police questioned the woman, but "she claimed she never did anything even with the footage".

In a response to AsiaOne's queries, police stated that they were alerted to a case of mischief at Block 452B Sengkang West Way on July 29 at about 7.55am. It added that they had attended to a similar incident at the same location on July 11.

The woman's violent potshots prompted one netizen to wonder if her actions were fuelled by anger at something, even if they were uncalled for.

"She threw those eggs with so much malice and anger… Maybe raise the issue with her first? Find out what's her problem," the commenter advised.

And with food prices rising across the board, many netizens felt the pinch from the apparent wastage.

"Wasting eggs only, why not fry and eat," wrote one netizen.

On July 20 this year, a 21-year-old woman was ordered to undergo reformative training for least six months after pleading guilty to six charges of harassment, mischief and theft.

Jasmine Lau Jie Min had thrown various objects, including eggs, at the unit next to hers on the ground floor of a HDB block at Circuit Rd, The Straits Times reported. She also admitted to splashing oil, black sauce, a white liquid and throwing pieces of food and a white powdery substance at the door on another occasion.