Having a child has made Ms Kim Lim, a local socialite and daughter of billionaire-philanthropist Peter Lim, realise how important it is to ensure that children - especially those in less privileged areas - are well taken care of.

She said: "Now that I am a mum, it made me realise that kids depend on us for everything and it is important for them to have a good childhood."

Last month, the 27-year-old posted on Instagram photographs of gers, or houses, that she had helped construct in Mongolia, dedicating them to her one-year-old son, Kyden.

When The New Paper reached out to Ms Lim, she said: "I want my kid to grow up and understand the value of paying it forward and care for the people in need.

"That is a value my dad has instilled in me, and I hope to do the same for my boy."

She said while she was first inspired to lend a hand to the homeless situation in Mongolia after she had watched a documentary on the issue, she was still struck by what she saw when she was there.

She said: "I saw an unfortunate situation where the mother was unwell and needed medical help and a one-year-old was left unattended in the day without food.

"In some cases, they do not even have the basic necessities such as clothes warm enough for winter and food."

She said she realised that growing up in Singapore, many children are privileged.

Her act of kindness was covered by national Mongolian channels, including news stations such as C1, and she posted an image of a plaque that she had received in appreciation of her donation.

She said: "I am pleasantly surprised with the media support in Mongolia.

"I hope with this coverage, it will create more awareness of the homeless situation in Mongolia, and more people will step forward to play a part in making a difference in the lives of these less fortunate people."

She said most of the planning and work was done in Singapore prior to her trip, and her uncle, who is based in Mongolia, helped with the liaising for the construction of gers.

And while she was there, she visited the eldercare centres and orphanages in the rural area as well, to have a better understanding of what the homes really need. 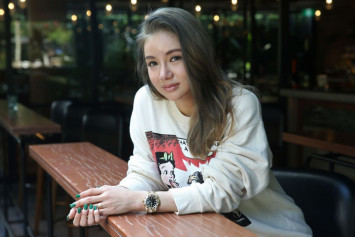 Ms Lim said: "I strongly believe one should personally be on the ground to understand the situation and be involved in the charity process to make sure that all the help and donations reach the people who need it most."

She added: "What I can do alone is limited, I hope there will be a ripple effect from this charity and (it will) create more awareness of the homeless condition in Mongolia, and eventually more people can come together to work on it."

Said Ms Lim: "I am still focusing on projects to help more children or people in a less privileged environment, but I am looking beyond Mongolia."