SINGAPORE - SP PowerGrid, part of energy supplier SP Group, was fined $150,000 on Friday (July 2) for a workplace accident that resulted in an electrocution death in September 2017.

The victim, Mr Asogan Suparamaniam, was the director of Global Marine Construction & Engineering and had been contracted to help decommission a substation in Kranji.

Court documents did not state his age.

A substation is part of an electrical distribution system and transforms high voltage current to a lower voltage for use in homes, commercial buildings and public services.

The court heard that industrial landlord JTC wanted to decommission the substation which involved diverting low- and high-voltage cables before removing them and other components.

SP PowerGrid is authorised to transmit electricity for and on behalf of SP PowerAssets, which managed the substation.

At about 10.15am on Sept 24, 2017, Mr Asogan and five workers gathered at an overground box to begin work on the low-voltage cables.

After allowing the workers to start work, he left the area.

At the time, the live apparatus inside the box was fully exposed to everyone in the area, and there was no one from SP PowerGrid to supervise them to ensure safety, said Ministry of Manpower prosecutor Mohd Riasudeen. 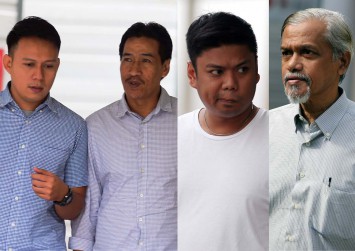 Mr Asogan's bare hands came into contact with conductive parts of a cable and he was electrocuted.

He was taken to hospital where he later died.

The prosecution said SP PowerGrid failed to ensure that the box with live apparatus was not exposed, unless work was carried out under the direct supervision of an authorised person.

"After the doors and protector panels of (the box) were completely removed, the live apparatus inside it was completely exposed and left unattended by the company's employees. This breach resulted in the workers and the general public being put in grave danger of electrocution," said the prosecution.

The company was also found to have not established a safe working method to isolate and identify electrical cables and failed to lock up the box when Mr Adam left the area.

For failing to ensure the safety of workers not employed by the company, who may be affected by work carried out at the site, SP PowerGrid could have been fined up to $500,000.