Lim Min Zhang and Cheryl Teh
The Straits Times

SINGAPORE - Spize's owners had decided that they would end the business at the River Valley outlet soon after a fatal food poisoning incident last month (November).

Mr Haresh Sabnani, co-founder of the restaurant that has four outlets across Singapore, told The Straits Times on Friday morning (Dec 7) that the company had decided to sell a part of their business.

He spoke to ST before a press conference on Friday where the National Environment Agency (NEA) said it has terminated the operating licences of Spize restaurant in River Valley Road with immediate effect, in view of the "egregious nature" of the food hygiene lapses it found following the incident on Nov 6.

Seven food poisoning incidents were found to be linked to the outlet, involving 82 people who had fallen ill after eating food from there between Nov 6 and 9, said the authorities.

Mr Haresh did not elaborate on the reasons for considering the sale, but said Spize is "engaging NEA's concerns and action as expressed in their notice" and is conducting its own investigation into the River Valley outlet.

He added that Spize will be issuing a response "in due course".

ST understands that Spize was notified of the termination on Friday.

"We have taken and continue to take significant steps to ensure that we maintain a high hygiene standard at all our other outlets. We have also since engaged the services of a credible food hygiene consultant to identify any hygiene issues and to resolve them," added Mr Haresh.

Posted by The Straits Times on Friday, December 7, 2018

It was not clear which business they were intending to sell, but checks by ST found that the property at 409 River Valley Road belongs to two people not listed as shareholders of the company, unlike the property at 336 Bedok Road, which Spize owns.

As of 4pm on Friday, the River Valley outlet's Facebook page has been removed, although the restaurant's website still lists River Valley as one of its outlets.

"Any operator who accumulates 12 or more demerit points within 12 months will be liable for a two-week suspension under the Points Demerit System," said the NEA, in a statement. 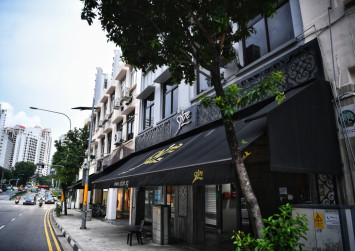 Some customers interviewed by ST were relieved that the licence for Spize in River Valley Road was revoked, but others hoped that more could be done to prevent recurrences.

A customer in his 40s, who wanted to be known as Mr Wu, was dining at the Bedok branch of Spize when the Straits Times visited the outlet on Friday afternoon.

When asked if he was concerned about the River Valley outlet's licences being revoked, Mr Wu said that he was eating at the outlet out of convenience.

"It's all right, because the problems were at the other outlet at River Valley," Mr Wu said. "But I'm wondering why the other three outlets are not closed as well even when they're under the same boss."

Ms Jeanette Lim, 27, an administrative executive who used to be a regular at Spize's River Valley outlet before it closed, said she felt disturbed at the extent of contamination found during the joint inspection conducted by NEA, Ministry of Health (MOH) and the Agri-Food and Veterinary Authority (AVA).

"I think the NEA should slap a harder penalty on errant operators. This will prevent recurrences of the same event," Ms Lim said.

Read Also
Spate of food poisoning cases in Singapore: Bug or contaminated source may be the cause

"We cannot allow deaths to happen and have dozens of people falling sick, especially when cross-contamination can be prevented."

Mr Kenneth Lim, 39, an insurance agent, said the Spize case might just be the tip of the iceberg.

"I'm not confident that every food outlet in Singapore follows the NEA's guidelines 100 per cent," Mr Lim said.

"If the NEA can't monitor every outlet closely, they should put up rules like harsher fines for violations, and impose strict rules on registering workers with the agency. This will deter operators from cutting corners."