A Singapore Airlines plane at Changi Airport. SQ Flight 423 was escorted safely back to Changi Airport by Singapore's air force and touched down at about 8am.

The Straits Times understands that the threat turned out to be a hoax.

SQ Flight 423 was escorted safely back to Changi Airport by Singapore's air force and touched down at about 8am.

All passengers, except for a woman and a child, disembarked safely and had to undergo security screening before they could leave. 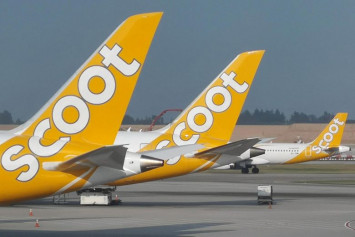 The woman and the child were held back for questioning by the police, who are investigating the incident.

Preliminary checks showed that the airline had received a call after the plane left Mumbai's airport on Monday at about 11.35pm local time. The caller claimed that there was a bomb on the plane.

An SIA spokesman told ST: "Singapore Airlines confirms there was a bomb threat concerning SQ423 operating from Mumbai to Singapore... We are assisting the authorities with their investigations and regret that we are unable to provide further details."

The last such incident involving a Singapore carrier occurred in April 2018 on a Hat Yai-bound Scoot flight.

A passenger, who was unhappy about being told that he had to check in his carry-on bag, joked that he had a bomb in the bag.

The plane made a U-turn, with fighter jets from the Republic of Singapore Air Force scrambled to escort it back.

In October the same year, the passenger, Hsu Chun Meng, was fined $4,500 for breaching the Protection from Harassment Act by using threatening words to cause alarm.