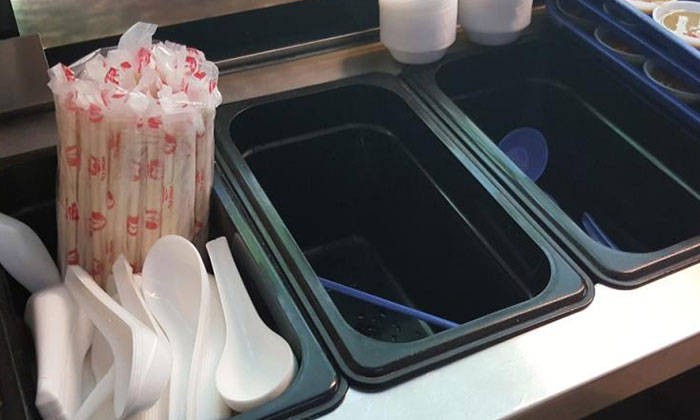 Stallholders at Bedok Interchange Hawker Centre say that their cutlery have been going missing for the past few months, causing a few of them to switch to disposable ones.

Among those affected, a zichar stall had to buy an additional 300 sets of cutlery, while a western food stall bought another 400 sets within six months.

A bee hoon stall owner, Mr Chen Jing Guang, 42, told Lianhe Wanbao that his stall has been using plastic cutlery for the last three and a half years, but they have been going missing for the past six months.

He said: "A pair of chopsticks cost 25 cents. Just buying new cutlery at the end of every month costs an addition $10."

He added that the stall uses only disposable cutlery now: "Each time customers ask for normal cutlery, I will explain to them the reason behind the switch."

The hawker centre has been in operation for the past three years, and some vendors revealed that since the beginning, cutlery have been vanishing.

After the last renovation, some vendors switched over to disposable cutlery, while others use both disposable and normal cutlery.

A Thai food stallholder, Mr Ge Qiang, 40, lamented: "This situation has been persisting for three years already. Every three months, I'll fork out about $30 to get another 60 new sets of cutlery."

Mr Ge said that even though the vendor has promised that cleaners will be more careful with the cutlery, the situation has not improved.

He thus decided to provide both disposable and normal cutlery so his customers can choose.

Lianhe Wanbao understands that the situation varies among the stalls, and for those which are not badly affected, an average of 50 sets of cutlery would be added every three to four months.