But the physician was not there to offer medical support.

Rather, Lim Baoying was receiving acclaim for being the top local woman finisher at the SCSM.

Lim had run the SCSM almost every year since 2006, and her previous best finish was fifth last year.

The resident physician at the Changi Sports Medicine Centre had treated Soh Rui Yong - who emerged the top Singaporean male runner on Sunday - after he picked up a foot injury at the Berlin Marathon in September.

"After Berlin I was struggling with posterior tibial tendinosis in my left foot. It was very sore," explained Soh. "So when I came back to Singapore, I went to see Baoying, and she gave me this very painful treatment called a PRP (platelet-rich plasma) injection.

"Now I'm much better. I was able to cool down after my race. Usually I'm limping around, so it was very effective, and I'm very glad I get to share the stage with Baoying.

"It's as though it has come full circle."

Lim was giddy with excitement at her unexpected achievement, breaking out in fits of giggles while answering questions.

Aside from juggling training with work and studies, she also had to contend with a sprained left ankle - she injured it on Saturday after stepping on an uneven grass patch - making her unlikely victory even more impressive.

"I'm currently doing a Masters programme as well, so I have really under-trained this year," she explained. "I've been sleeping past midnight almost every night. So to win is amazing." 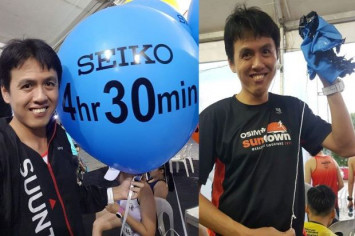 While the time was far from his personal best of 2:24:55, he was pleased that the "hard, fast long run" - a tune-up event for his bid to break the national marathon mark of 2:24:22 at the Tokyo Marathon in March - went well.

"This race definitely gives me confidence... that I can adapt accordingly to different plans," he said. "And 12 weeks - barring injury - should be pretty good preparation to go from what I'm doing now to get to the shape I need to be in to run fast in Tokyo."

Ahead of the event, the contest to be the top local man - which doubled up as the national championship - had been cast as a spiced-up rivalry between Soh and his fellow national marathoner Ashley Liew.

Liew had finished second last year behind Soh, and the pair went head-to-head against the backdrop of comments made by Soh two months ago alleging that an act of sportsmanship by Liew at the 2015 SEA Games - which earned the chiropractor widespread praise as well as a prestigious international accolade - did not happen.