Lim Baoying was handed the sanction by Monaco-based Athletics Integrity Unit (AIU), the results management authority for the SCSM 2018.

SINGAPORE - The top local woman finisher at the 2018 Standard Chartered Singapore Marathon (SCSM) has been provisionally suspended after failing a drug test.

Lim Baoying was handed the sanction by Monaco-based Athletics Integrity Unit (AIU), the results management authority for the SCSM 2018, which confirmed the suspension to The Straits Times on Tuesday (April 30).

The sample Lim provided after the Dec 9 SCSM race had tested positive for modafinil, which is prescribed to people with sleep disorders to stay alert or improve focus, and is on the World Anti-Doping Agency (Wada) Prohibited List.

The AIU, in response to queries from ST, said it would not provide details on Lim's situation, as it is an "ongoing case". But its spokesman said: "We do confirm that the athlete is provisionally suspended since Feb 8, 2019."

Lim, who is a resident physician at the Changi Sports Medicine Centre, explained to ST that she had taken the medication to fight sleepiness before the race, and declared this on the anti-doping form before submitting her urine sample, which is required of the podium finishers after the race.

She added: "I then checked the Wada list of prohibited substances for in-competition participants, where I discovered that I had flouted the doping rules.

"Knowing that, I decided to relinquish my title as the Singapore female champion of the SCSM 2018, well before the results of the urine test were known. This was an independent decision, made on my own accord."

She added that she did not make any claim for the $10,000 prize money, and that she accepted AIU's decision.

"I sincerely apologise to all affected parties, and the good faith that the running community has placed in me," she added. 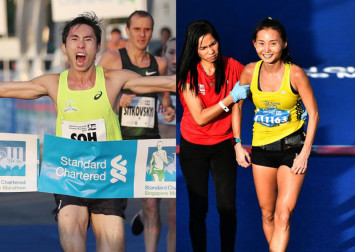 In her post-race comments, she said she had "under-trained" in 2018, as she was juggling training with work and a Masters programme she was pursuing.

Geoff Meyer, managing director of SCSM organisers Ironman Asia, cited the ongoing case and would not say what their procedures were in the event of a failed drugs test.

"Ironman and the SCSM recognise and respect the process and measures taken within the AIU authority and rules, and are unable to comment further at this time," said Meyer.

Singapore Athletics president Tang Weng Fei said that Lim had informed him of her issue "soon" after the SCSM race.

Tang added that the national track and field body helped her submit documentation to the AIU, which was founded by the International Association of Athletics Federations (IAAF) in April 2017 to combat doping in the sport. The AIU functions independently from the IAAF.

According to Tang, even if the AIU turns Lim's provisional suspension into a permanent one, the athlete can still compete in mass runs like the SCSM. Lim has said she remains passionate about running and hopes to continue participating in mass runs in the future.

"She would still be able to participate as a social runner," said Tang, who ran for the post of treasurer at IAAF's last elections, in 2015, but failed in his bid.

"It's just that if she wins, she will not be eligible to receive the prize."

The Health Sciences Authority told ST that modafinil is a potent medicine that is not registered in Singapore, and should be taken only under strict medical supervision.

"Inappropriate use of modafinil by healthy individuals, such as to stay alert or improve focus, can be harmful," said its spokesman.

"Modafinil can cause serious side effects such as heart problems, anxiety, Stevens-Johnson syndrome and toxic epidermal necrolysis, (which) are serious skin reactions that can be life-threatening. Modafinil also carries a potential risk of dependency due to its stimulant effects on the brain."