The steps of the escalator collapsed while four people were riding on it on April 13, 2019.

SINGAPORE - The steps of an escalator in Tampines 1 mall, which collapsed last Saturday evening (April 13) while four people were riding on it, were likely dislodged by the wheels of a stroller.

Ms Maggie Chua, the mall's general manager, told The Straits Times on Monday that the shopping centre's management reviewed the closed-circuit television footage (CCTV), which showed that an unfolded stroller was on the escalator when the incident happened at about 9.40pm.

"Wheels on a stroller may jam escalator steps, causing dislodgement and triggering the escalator to a safety stop," she said.

Shoppers were left reeling in shock last Saturday after the steps at the bottom of the moving escalator, which was on the second storey, suddenly broke apart. No one was hurt. 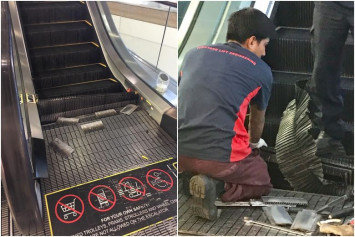 A nearby tenant told Chinese-language newspaper Shin Min Daily News that they had heard loud sounds from the escalator.

Ms Chua said the escalator was immediately closed for a safety assessment. She added that the mall also alerted the Building and Construction Authority.

"We have been working closely with all parties, including our escalator vendor, Otis, to conduct a thorough investigation into this isolated incident," she said.

AsiaMalls, which manages Tampines 1, said that it remains committed to the well-being and safety of the community.