Student with Covid-19 convicted of dining outside, taking MRT and lying to doctor

Esther Tan Ling Ying had lied about her travel history to get medicine from a clinic in Clementi.

SINGAPORE - An undergrad who was studying acting in Britain was convicted on Monday (Aug 16) of exposing others to the risk of Covid-19 infection after returning to Singapore.

Esther Tan Ling Ying, 24, had some Covid-19 symptoms before she flew back from London via Doha. But in breach of her stay-home notice (SHN), she had eaten at a food court at the airport on March 23 last year.

She then went to a clinic in Clementi where she coughed with her mask down and lied about her travel history to get medicine.

Tan began her bachelor's degree in acting course in London in 2017, but returned last year before completing her studies, following an advisory by the Singapore Government to return to Singapore.

Prior to leaving Britain, she had flu-like symptoms and lost her sense of taste and smell.

She did not see a doctor and instead chose to self-isolate until the day of her departure from London.

She still had a blocked nose and no sense of taste and smell when she landed at Changi Airport Terminal 1 on March 23 last year.

She was issued an SHN and told by an Immigration and Checkpoints Authority officer to go home immediately.

She cleared immigration at about 2.40pm.

However, before heading home, she and her parents ate at the foodcourt at Terminal 1, spending about 30 minutes there.

They also took an MRT train to Clementi, before Tan and her mother went to the Clementi Family and Aesthetic Clinic in Clementi Avenue 3, which is near their home.

It was about 5.30pm the same day when she saw the doctor, and Tan lied about her travel history to get some medicine.

The doctor testified about how Tan told her she was studying at a drama school, but claimed to have been back in Singapore since January last year because of Chinese New Year.

She said Tan claimed to not have gone back to Britain because her parents were concerned about the virus, and that she had "dodged a bullet".

The court heard how Tan had also told the doctor that one of her teachers potentially had the virus after returning to Britain from Spain, and how some of her classmates had fallen ill.

A video of Tan coughing with her mask lowered in the clinic was later shown to her by the prosecution.

She tested positive for Covid-19 on March 30. 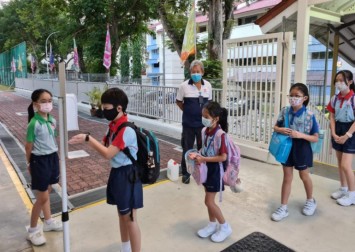 Tan claimed trial after being slapped with one charge of exposing others to the risk of Covid-19 last year.

She claimed that she did not suspect she had the virus, and that the SHN instructions were confusing.

In his submissions, Deputy Public Prosecutor Nicholas Lim rubbished this, saying Tan was fully aware of the crucial points of the SHN and knew that she was a potential case of Covid-19.

For exposing others to the risk of infection of Covid-19, Tan can be jailed for up to six months and fined up to $10,000.