Runners queue for the public water coolers at Gardens by the Bay East.

Runners at this year's Osim Sundown Marathon, organised by Infinitus Productions, were left frustrated when they could not get water at certain designated points of the run.

This happened during the half and full marathons, which were supposed to be flagged off in waves from the F1 Pit Building from 11.30pm on Saturday, but were delayed for up to an hour.

Runners were unable to get water at three hydration points.

A picture on Facebook shows runners queuing at water coolers at Gardens by the Bay East.

Dear runners, Thank you for your participation in the Sundown Marathon. There were issues encountered by some runners...

Infinitus Productions, the organiser of the 12th edition of the race - billed as Asia's biggest night run - apologised on Facebook on Sunday for the inconvenience caused.

It said: "The shortage was due to some logistical issues of the deployment of the water.

Read Also
Man loses 26kg in 6 months through running, and will take part in the Sundown Marathon 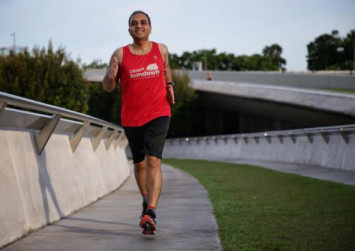 "Upon being alerted of the issue, we dispatched additional supplies of water immediately to the affected hydration stations.

"Unfortunately, the new supplies did not reach the hydration stations and runners in time."

The organiser also explained that the delay in flag-off was due to an unforeseen obstruction on the route, which had to be cleared for safety reasons.

Student Christopher Woo, 26, who ran the half marathon, told The New Paper yesterday: "I felt disappointed that even after the multiple delays at the start of the race, the race experience was disrupted further by insufficient planning and distribution of fluids to runners."

Facebook user Eugene Tan said: "Having three water stations without any hydration available is really dangerous for runners running a full marathon. This is the most basic safety requirement for any race, let alone a full marathon."