Support for Section 377A drops; Singaporeans more supportive of same-sex relationships in general

SINGAPORE - Less than half of people in Singapore support a law criminalising gay sex, a study has found, amid changing attitudes towards same-sex relationships.

The study on attitudes towards same-sex relationships by market research firm Ipsos polled 500 people on the topic of Section 377A of the Penal Code and found that 44 per cent of respondents support the law.

Meanwhile, the segment of people who oppose the law has grown, with 20 per cent of respondents against it now, compared with 12 per cent in 2018.

As for the remaining 36 per cent of respondents, 32 per cent said they neither support nor oppose the law, while 4 per cent preferred not to say.

These findings, released on Thursday (June 16) by Ipsos, come amid an ongoing consultation exercise by the Government to better understand the viewpoints of diverse groups of Singaporeans on Section 377A before it decides on the next steps.

The issue of whether the law should be changed or repealed resurfaced recently, after the Court of Appeal ruled on Feb 28 that the law will stay on the books but cannot be used to prosecute men for gay sex.

Responding to MPs' questions in Parliament on the ruling in March, Home Affairs and Law Minister K. Shanmugam said the Government was carefully considering the best way forward and consulting different groups on their viewpoints.

Read Also
Policies need to evolve to keep up with changing views: Shanmugam on Section 377A 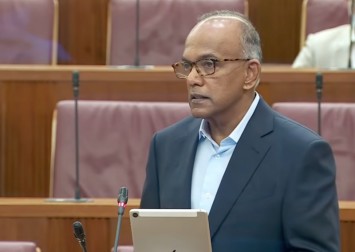 "If and when we decide to move, we will do so in a way that continues to balance these different viewpoints and avoid causing a sudden, destabilising change in social norms and public expectations," he had said.

He also said public policies need to evolve to keep abreast of changes in views in society, and legislation will have to evolve to support updated policies.

For the recent study, Ipsos polled 500 Singaporeans and permanent residents aged 18 years old and above on various questions about same-sex relationships in an online survey between May 25 and June 2. Quotas on age, gender and ethnicity ensured the composition of respondents reflected Singapore's overall population distribution, it added.

Among the 44 per cent who said they support Section 377A, 21 per cent strongly support it, while 24 per cent somewhat support it. The numbers do not add up to 44 per cent because of rounding, Ipsos said.

Meanwhile, among the 20 per cent who oppose the law, 11 per cent strongly oppose it while 9 per cent somewhat oppose it.

Ipsos said that in general, Singaporeans have become more supportive of same-sex relationships in the past three years, especially young adults.

In all, 45 per cent of respondents said they had become more accepting of same-sex relationships compared with three years ago.

Ms Melanie Ng, director of public affairs at Ipsos in Singapore, said: "Today, we continue to see a steady shift in societal attitudes, led by younger adult Singaporeans who are more ready to see the country embrace same-sex relationships.

"At the same time, while the older generation of Singaporeans remains largely opposed to same-sex relationships, we also see attitudes slowly changing."

The study also delved deeper into what the changing attitudes towards same-sex relationships might mean, and canvassed issues such as parenting rights and discrimination.

Meanwhile, on discrimination, 45 per cent of respondents said they are willing to speak out against someone who is prejudiced against LGBTQ (lesbian, gay, bisexual, transgender and queer) people. And 35 per cent said they support having laws that ban discrimination against LGBTQ persons in areas such as employment, education, housing and social services.

Ms Ng said the changing attitudes towards same-sex parenting and discrimination against LGBTQ people indicate a deeper awareness of the issues confronting the community.

"This understanding and empathy paves the way for Singaporeans to better embrace diversity and embed inclusivity within the nation's social fabric," she added.