No football fan would miss out on watching the Premier League title decider — even if you're a campaigning politician who just spent hours paying house visits.

Staying awake in the wee hours of the morning paid off though, as Speaker of Parliament Tan Chuan-Jin saw his favourite football team, Liverpool FC, clinch the league trophy for the first time in 30 years. The hard-earned victory was so bittersweet it even moved the man to tears.

He didn't try to hide his excitement at all, making multiple posts about the win on all of his social media accounts to celebrate the win.

When you get knocked out in the UEFA Champions League Finals, What do you do? You pick yourself up and win it the next...

The die-hard stan wasn't alone in his excitement too.

True to the team's motto You Will Never Walk Alone, several other of his party members - including Lee Hsien Loong himself - joined in on the fiesta, even if not everyone was a Liverpool fan.

Woke up this morning to find an email from a friend – a lifelong supporter of Liverpool FC – telling me the glad news....

Yay! After 30 years, and ironically, thank you Chelsea. You never walk alone!

We are the Champions! #YNWA

Woke up to news that Liverpool has won the EPL after 30 years. A “long-suffering supporter” shared this video with me....

And of course, he had to include the hashtag #TheOriginalResiliencePackage, just because. 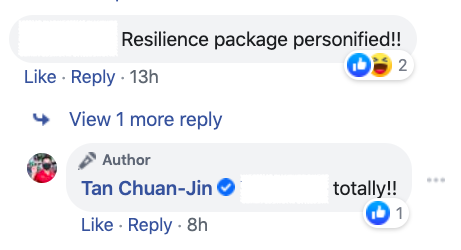 ALSO READ: Pineapples on pizzas, Game of Thrones and other revelations in quickfire Tan Chuan-Jin Q&A