A white speeding BMW had slammed into a vacant shophouse unit and burst into flames on Feb 13, 2021.

SINGAPORE - More safety features will be installed at Tanjong Pagar Road by the end of the year, said the Land Transport Authority (LTA) on Wednesday (Sept 8).

This follows the fiery pre-dawn accident on Feb 13, the second day of Chinese New Year, when a white speeding BMW slammed into a vacant shophouse unit and burst into flames. All five men in the vehicle were killed.

LTA told The Straits Times more road dividers will be installed along Tanjong Pagar Road in the coming months.

The intersection between Tanjong Pagar Road and Tras Link will also have traffic lights and pedestrian crossings installed.

Members of Parliament for the area, Ms Indranee Rajah and Ms Josephine Teo, said earlier that the Traffic Police and LTA would look into the road conditions there.

Among the suggestions were more cameras and speed bumps.

Responding to queries from ST, LTA said that according to past records, the location is not accident-prone and there are already several existing traffic-calming measures. 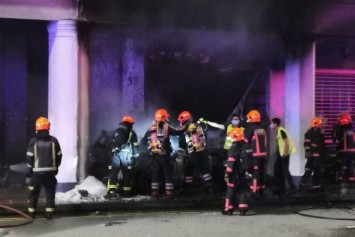 These include on-street parking, centre median strips and designated crossing points aimed to slow down motorists.

To improve the safety of traffic conditions in the area, it will be putting in place more measures.

LTA said the new features will help pedestrians cross the road in two stages and also slow down motorists.

It added that the intersection between Tanjong Pagar Road and Tras Link will be signalised and have a signalised pedestrian crossing. The planned enhancements are expected to be completed in the fourth quarter of this year.

The Traffic Police said it had stepped up patrols and enforcement in the area after the accident to deter and detect traffic offences.

It also conducted a terrain assessment, which found the area was not suitable for speed enforcement cameras to be installed.

The Traffic Police said that since there were many eateries in the area, some of the key traffic control challenges faced were illegal parking and vehicles obstructing traffic.

It added: "When spotted, the Traffic Police will not hesitate to take action against motorists who flout traffic rules and regulations."

Last month, ST visited the site of the crash at 37 Tanjong Pagar Road and found traffic through the narrow lanes constant but slow-moving. Pedestrians also crossed the road frequently, weaving in between vehicles.

All of those who spoke to ST said they felt the incident was an isolated one, and that minimal additional measures were needed.

Mr Imran Muhammad, 36, who works at Italian restaurant, Gio, several metres from the site of the crash, said that because the road is narrow and winding, speeding is uncommon.

"Widening the road is not an option, and speed bumps would just cause more jams," he said.

Ms Joelle Chua, the owner of Bluemist Cafe and Bistro, who is in her 40s, said: "New installations might be a problem for cyclists, and many of the delivery riders and elderly folk who move in and out of the area."

Residents living in the flats overlooking the stretch also said they felt the traffic situation was under control.

Mr Long Hain Kwee, 62, said speeding was uncommon in the area, though he would sometimes hear the revving of engines at night.

He said: "Many people come here with their luxury cars and rev, but they can't speed because the road is narrow.

"I'd rather the authorities build sheltered drop-off points instead of trying to install other things."