SINGAPORE - As with many 12-year-olds, collecting his Primary School Leaving Examination (PSLE) results slip was a nerve-racking experience for Nur Haqim.

The Teck Whye Primary School pupil, who had struggled with his studies, was the last person in his class to be given his results on Thursday (Nov 22). He was "almost in tears" as he approached his teacher, Madam Azlina Hassan.

But he was moved to tears when Madam Azlina gave him a handshake and a tight hug, before saying: "Well done, you passed your PSLE. I'm very proud of you."

Every pupil in Madam Azlina's class also received kind words and a warm hug from her that day.

Haqim's mother, Madam Haryati Mohamad Saleh, recorded the moment and uploaded it to Facebook on Thursday. It was later shared widely online. 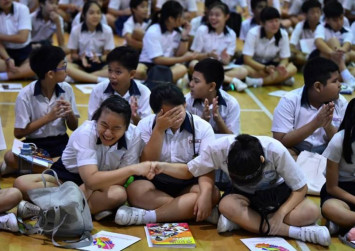 Madam Azlina, 51, who has been teaching for more than 29 years, told The Straits Times that she felt what she did was "natural" for her, as she is close to her pupils.

Though she has taught more than 15 batches of Primary 6 pupils, she still remembers their reactions when collecting their results, and makes it a point to hug and comfort all of them.

"Every child is special to me," she said.

She explained that the pupils she teaches tend to be weaker in their studies, and are always worried about failing. "Most of the time, they think that they cannot make it."

Some of her pupils come from troubled backgrounds too, which makes it difficult for them to focus on their studies.

"Sometimes, people forget that a simple hug can make a world of difference to a child," she said, adding that she was sure her colleagues would have done the same.

Madam Azlina said that she puts an emphasis on her pupils' character development and not just their academic achievements.

"I tell all my pupils: When you leave primary school, you leave not only with knowledge of English, maths and science... (You also) bring school values with you. Leave with your heads high and know that you have learnt to do your best, no matter what job you have in the future."

The veteran teacher has not forgotten the time she collected her own PSLE results and recalls how nervous she was. "It's a very big step for kids," she said.

Madam Azlina told ST that she used to be a "playful" student, but her secondary school teacher believed in her and encouraged her, and would remind her to do her best.

Decades later, she shared similar words of encouragement with Haqim when he received his results.

"I told him that this is the result of all the hard work you put in... that I am proud of him," she said.

Madam Haryati said she had not intended to share the video publicly. However, when the 42-year-old nurse watched it again, she was so moved that she cried.

"My son is a very weak pupil, so I'm very happy that he passed and is going to secondary school," she said.

"I'm sure that whatever (Madam Azlina told) him, he will remember for life."

She added that she "truly appreciates" the teacher's actions.

"Sometimes, when you meet teachers with your children, they talk about how the child needs to focus, study more, be more disciplined - but you're telling all this to an 11-year-old, how will they understand?" said Haqim's mother.

"But (Madam Azlina), she helps you see the strength your child has and makes full use of their strengths."

Asked if she had any words to share with parents of children who just received their PSLE results, Madam Azlina said: "It's about just being there and validating their achievements, no matter how small."