A file photo of East Coast Park. A teen detonated a pipe bomb at the park on June 7, 2020.

SINGAPORE - When a teenager made plans to meet his friend at East Coast Park in 2020, enjoying the sea view was not on his mind. Instead, they found a quiet spot where he detonated a pipe bomb he had made.

On Thursday (May 19), he pleaded guilty to four charges for the offence, which took place on June 7, 2020, as well as other offences.

He cannot be named as those accused of committing offences before they turn 18 are covered under the Children and Young Persons Act.

During the Covid-19 circuit breaker in 2020, he started researching online about weapons, bomb-making, sparkler bombs and other explosives.

This led him to read about pipe bombs, and he decided to construct improvised ones some time between May and June that year.

Deputy Public Prosecutor Sean Teh said in court documents that on June 7, 2020, the offender made plans with a friend to meet at East Coast Park and find a quiet spot to detonate the improvised pipe bombs.

The court heard that he left his home at about 7.30pm with two improvised pipe bombs and several improvised sparkler bombs.

He rode his e-scooter to the park to meet his friend and his friend's pal, and the trio headed to a skate park there.

DPP Teh said: "They decided to detonate their improvised pipe bombs there as it was quiet."

He then picked up one of the improvised sparkler bombs and threw it towards a grass patch, causing it to explode on contact with the ground.

The detonation and explosion of the improvised pipe bomb were recorded on the offender's mobile phone, and he posted a video clip on his Instagram account. 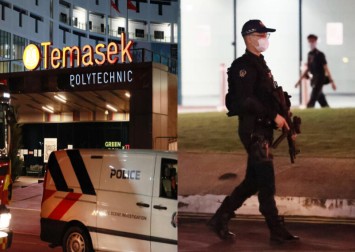 He had also previously posted a video of an improvised sparkler bomb detonating at East Coast Park in April 2019. Acting on the offender's instructions, his friend had ignited the bomb and threw it towards the direction of the open sea, where it detonated.

On June 19, 2020, a police report was made about pictures and videos of homemade explosives posted on the account.

The next day, the police raided his home and found several items related to the construction of an improvised bomb, including a carton of matchstick boxes and a container with a brown powdery substance and wood residue.

According to court documents, an Institute of Mental Health report dated Aug 7, 2020 stated that, between July 25, 2017 and April 9, 2020, the offender was diagnosed and treated for attention deficit hyperactivity disorder and conduct disorder.

He will return to court on June 30 for sentencing.