'Tell him to come to my shop': Man responds to alleged challenge by punching Bukit Timah shop owner

This is why you should never insult someone's mother.

A man accused an aquarium shop owner of insulting the man's mother and punched the shop owner in the neck and in the face outside his own shop.

In response to a Stomp query, police confirmed that a report was lodged and are looking into the matter.

A video of the incident circulating online shows the shop owner being assaulted even as he denied talking about the man's mother.

The incident took place just outside the Spectrum Betta shop in Bukit Timah Shopping Centre on Oct 31 around 3.30pm.

Betta is a species of fish that includes Siamese fighting fish popular with hobbyists.

The man walking ahead slid open the shop's door and accused someone inside repeatedly in Hokkien of insulting his mother.

The shop owner appeared at the doorway and said he did not talk about the man's mother.

The man kept repeating the accusation and the shop owner kept denying it.

The second man, who had been silently standing to the side, stepped forward, but the first man pushed him back and told him not to get involved.

The shop owner again denied the accusation and the man punched him in the face, causing him to go backwards into his shop with his hand on his left cheek where he was hit.

The man called the shop owner an "ah gua" again and asked in Mandarin: "Didn't I message you?"

The shop owner said: "You messaged me?"

The man demanded: "Why didn't you reply?"

The shop owner said because the man was making the accusation about his mother, the shop owner did not reply to the man's message as he did not talk about the man's mother.

The man asked the shop owner to prove that he did not say that the man's mother should die.

The shop owner asked: "When did I talk about your mother?"

The man said: "You didn't? I heard about it before, but I didn't say anything. People have told me about it. I have seen the message with my own eyes... You didn't send me a message saying, 'Ask him to come to my shop?'"

The shop owner repeated: "Did I say anything about your mother?"

The man asked: "Didn't you insult my mother? You did or you didn't?"

The shop owner replied: "I was not talking about you."

The man retorted: "You weren't talking about me? 'Simon that motherf***er, tell him to come to my shop.' " 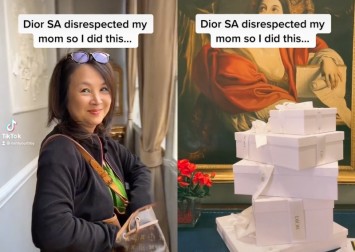 The shop owner said: "You show me the words, 'Simon that motherf***er.'"

The man said: "The message was sent by you."

The shop owner said: "Which one? Let me see it. You have hit me twice."

The video ends after that.

When contacted by Stomp, the owner of Spectrum Betta said that he had made a police report.

"I believe Singapore police will take this seriously," he said, adding that he was aware that the video was taken.

"It's good if Stomp can post the video because such things should not happen in Singapore."

The shop owner told Stomp that he did not have any relationship with the man who assaulted him.

"I have only seen and know him in the betta community as he is one of the International Betta Congress judges in Singapore."

According to its website, the International Betta Congress is "a worldwide union of betta-lovers and breeders" and has several betta shows a month around the around.