SINGAPORE - A Temasek Polytechnic (TP) student has admitted in a district court that he posted anti-Islam remarks on social media platform Instagram.

Chinese national Sun Sicong, now 21, pleaded guilty on Friday (May 6) to uploading online remarks with the intention of wounding the religious feelings of others.

The Singapore permanent resident committed the offence between 2018 and 2019.

Two other charges, including one count of harassment, will be considered during sentencing.

The court heard that Insta-story posts are automatically deleted after 24 hours.

The DPP told the court: “The offensive posts, however, resurfaced online some time around June 7, 2020, after the accused created and uploaded online further insensitive Insta-story posts... containing a screenshot of a rape victim’s recount of her rape ordeal along with (lewd and obscenity-laden) comments.”

Other Instagram users became upset when they saw Sun’s posts and responded to him.

In doing so, they referred to screenshots of his earlier anti-Islam posts, which went viral soon after.

They were widely disseminated over the Internet and police later received 62 reports from members of the public who felt threatened and alarmed after seeing the anti-Islam posts. 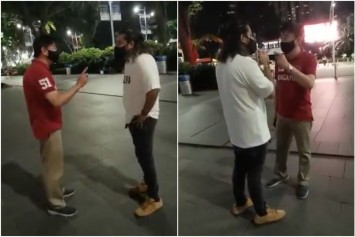 In an earlier statement, the police said that in June 2020, they received “many reports regarding an Instagram user who had posted insensitive comments and threats that could incite violence against the Muslim community”.

The police added that the posts contained hate comments that could wound religious feelings.

In their statement, the police also said that they take a serious view of acts that have the potential to damage racial and religious harmony in Singapore.

On Friday, defence lawyer Justin Ng told District Judge Kessler Soh that his client was around 18 when he made the posts and had committed the offence due to “youthful immaturity”.

Mr Ng also said that due to his nationality, Sun had been bullied by his schoolmates before he became a polytechnic student.

Judge Soh has called for a report to assess Sun’s suitability for probation and he will be sentenced on June 23.

Earlier, TP told The Straits Times that Sun had been suspended for two consecutive semesters following investigations in June 2020.

Its spokesman said: “TP does not condone any action or behaviour that incites hatred and violence.”

An offender convicted of uploading online remarks with the intention to wound another person’s religious feelings can be jailed for up to three years and fined.