'There was so much blood': Man allegedly attacks Tanglin Halt Food Centre hawker with wooden pole

A man allegedly attacked a 51-year-old hawker at Tanglin Halt Food Centre on April 8 at around 7.10am.

SINGAPORE - The police are investigating an incident in which a man allegedly attacked another man with a wooden pole after a dispute at Tanglin Halt Food Centre on Friday morning (April 8).

The man also allegedly punched a woman and fled the scene.

The police said they responded to a call for assistance at around 7.10am on Friday.

The victim, a 51-year-old man, was conscious when taken to hospital.

The victim's girlfriend, Ms Wang Wei, 54, told The Straits Times that the man charged at her boyfriend, Mr Punnataro Wee, with a 1m-long wooden pole that had a screw attached to it.

"It was without warning. We did not have time to react," she said in Mandarin, adding that they run a fish soup noodle stall at the food centre.

She said the man also runs a fish soup noodle stall there. 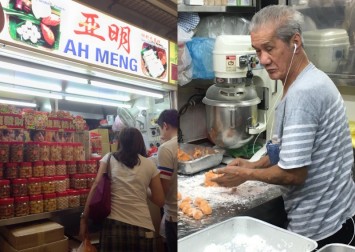 "My boyfriend was bleeding profusely; it looked quite serious. I tried to grab the weapon from (the man) and he hit my head," she added.

Ms Wang said her head and left hand were swollen from the attack.

"There was so much blood. My boyfriend's mask was soaked in it. I was so frightened."

A hawker in his 50s, who runs Tong Kee Chicken Rice stall next to Ms Wang's fish soup stall, said the incident lasted about two minutes.

The hawker, who wanted to be known only as Mr Tan, said: "The man attacked when the victim wasn't looking, without a word. My wife and I were so shocked that we shouted. It happened so suddenly."

Ms Wang claimed that the man had shouted vulgarities at them after a dispute in 2020, and Mr Wee had made a police report.

"I wish something could have been done sooner to prevent today's attack. My boyfriend's skull is fractured and he had to get nine stitches. I'm so worried about him," she said.