'There will never be another Robinsons': Shoppers and staff bid farewell to Orchard Road icon

Shoppers queueing outside the Robinsons store at The Heeren on Oct 31, 2020.

Retiree Serene Tan was on a mission when she visited the Robinsons outlet at Raffles City Shopping Centre on Saturday (Oct 31), a day after the 162-year-old department store announced it would close its last two stores here.

Ms Tan, who declined to give her age, was there to say goodbye to Ms Janet Chng, the Shiseido counter chief there.

"She's very nice to talk to. I was afraid I would not be able to find her after the store closes," said Ms Tan, who has known Ms Chng since 2018 and has been a returning customer since.

Ms Chng, 52, said other customers had messaged her to ask if she was okay after Robinsons announced on Friday that it would close its stores at The Heeren and Raffles City.

Their concern was not a surprise to her as she and the customers understand one another very well, said Ms Chng, who will be redeployed to another store.

She has been a Shiseido promoter at Robinsons for 17 years.

"The Robinsons staff and promoters are like family. I am very happy working here, this is our second home," she said.

Ms Chng added that many staff and promoters put up a brave front after learning of the closures. "They keep it to themselves. Once one tears up, everyone will tear up.

Robinsons said on Friday that it had decided to liquidate its stores owing to factors like changing consumer tastes and cost pressures such as rent.

Appointed liquidator KordaMentha will take control of Robinsons' assets and assess the options to realise value to maximise returns to creditors.

The retailer said it plans to do its best to transfer its staff to other brands under its parent company, the Dubai-based Al-Futtaim Group which owns other franchises, including Marks & Spencer and Zara.

On Saturday, shoppers turned up in droves at Robinsons' two outlets, which were visibly more packed than on Friday.

A queue of about 300 people had formed outside its store at The Heeren in Orchard Road before it opened at 11am.

The queue stretched past the Apple store down the road and snaked around the empty space in front of the mall several times.

At the Raffles City outlet, about 150 people were queuing outside the store at around 3pm.

The store also closed earlier at about 6pm instead of 8pm because it became too crowded.

The crowds came despite there being no closing-down sale yet. There were, however, co-promotions and discounts for some brands.

Robinsons said on Saturday that it is working with the landlords to arrange for an orderly sale of stock.

"We hope to be able to provide details of planned sales moving forward, very shortly," it added.

The two stores' last day is unclear. Robinsons has said it hopes to stay open "for the coming weeks".

Some customers were anxious about deposits and pre-payments made for mattresses.

In a notice at its Raffles City store, the retailer acknowledged the worries and said it is "scheduling meetings with mattress suppliers on an urgent basis" to try to address the matter.

The retailer added that it would notify affected customers once it resolves the situation.

There were many empty shelves at both stores when The Straits Times visited on Saturday.

Shortly after Robinsons announced the closure on Friday, promoters were seen packing up their goods to send them back to warehouses.

They had been told to do so by the brands that hire them.

Read Also
'The loss that we incurred is unimaginable': Unpaid for months, vendors rush to Robinsons to take back goods 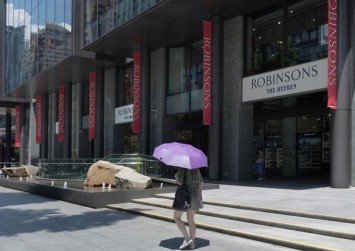 Ms Winnie Teo, 35, who has spent 10 years working in various Robinsons outlets as a promoter for a bed sheet retailer, said that rumours were already swirling among promoters about the impending closure two months ago.

Like Ms Chng, she will be redeployed to other stores that stock her brand's products.

But uncertainty hangs over Robinsons' 175 employees.

A 69-year-old cashier, who declined to be named, said she does not know if she can keep her job.

The cashier, who has worked at Robinsons for nearly 50 years, said "it was hard to accept" the closure.

She will be missed by customer Faith Tok, 30. Ms Tok said the cashier had wrapped a baby carrier she bought for her brother last month. The wrapping was very nicely done, said Ms Tok, who works in finance.

Another customer who sang the praises of Robinsons staff was 85-year-old retiree C. Yong, who waited 40 minutes to enter the Raffles City store.

"Even though other stores may have similar offerings, we prefer Robinsons," Mrs Yong said.

"There is a depth of sincerity their staff have that you can't find elsewhere," she said. "There is nothing like Robinsons... Robinsons is and old friend. If not, why would I take the time to queue up?"