Tens of thousands of people took to the streets in Hong Kong yesterday in fresh protests against a controversial extradition Bill, the first major demonstration since young protesters stormed the city's Legislative Council building last Monday.

The peaceful march, from Salisbury Garden in the Tsim Sha Tsui shopping district to West Kowloon station, was the first to be held outside of Hong Kong Island since major demonstrations began last month. But the turnout was much smaller than that of the first two Sunday protests last month, when one million people took to the streets on June 9 and two million turned out on June 16.

The march was directed not at the government, said organisers, but at visitors from the mainland so they could take Hong Kong's unhappiness over the Bill back to "all corners of China".

Hong Kong has been convulsed by protests for about a month over the now suspended Bill that would have allowed criminal suspects to be sent to the mainland for trial.

Protesters say this will erode Hong Kong's autonomy and could be used by Beijing to target critics.

"It is normal to have political demands of the government, and I can understand why Hong Kongers are acting like this, but at the same time, it is also making their society very divided," he said. 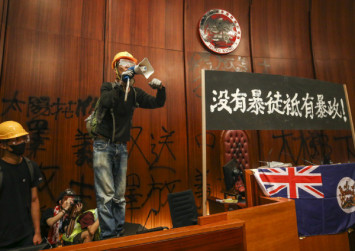 Many protesters, like seamstress Celia Cheung, 66, said they attended the march yesterday because they felt it was important to lend support to a movement that seems to be losing momentum: "We need to keep pressing on until the government responds."

Among protesters' core demands is for the proposed law to be withdrawn completely.

Observers said the anti-extradition Bill movement will likely take the form of small-scale scattered protests around the territory in the coming months.

The protesters, who tried to protect themselves with umbrellas, were pushed back by riot police.

Hong Kong Chief Executive Carrie Lam has asked to meet students' unions to mitigate tensions, but her offer of closed-door talks has so far been turned down.

Meanwhile, Beijing's Ambassador to Britain, Mr Liu Xiaoming, rubbished criticism of the extradition Bill in a BBC interview, adding that China had full confidence in Hong Kong's ability to resolve the situation.

Professor Lau Siu Kai, the vice-president of the Chinese Association of Hong Kong and Macau Studies, told The Straits Times that Mrs Lam's government was biding its time and waiting for public opinion to turn against the protests.

He added that demonstrations will likely evolve into scattered, small-scale "wildcat protests" that occur with little planning.

"We are in a deadlock. Demonstrators are empowered by what happened in recent weeks, and the government is weakened and not prone to take hardline actions," said Prof Lau.