There were at least 314 Covid-19 cases at eight bus interchanges as at Wednesday night.

SINGAPORE - The growing Covid-19 clusters at bus interchanges suggest that workplace practices across different interchanges could be causing the virus to spread, said an infectious disease expert.

This warrants closer investigation, said Dr Leong Hoe Nam from the Rophi Clinic, as he called for measures at these places to be tightened.

There were 314 Covid-19 cases at eight bus interchanges as at Wednesday (Sept 1).

"It could be the rest areas, the way they hand over and talk. There might also be a need to look at toilets, where they take out their masks, wash their faces - the toilet may turn out to be the most contaminated place," he said.

"The really essential workers, who cannot afford to fall sick, should wear proper surgical masks instead of cloth masks. I still see some people using last year's National Day Parade masks - those are not good."

There are about 9,500 bus drivers here, and the Land Transport Authority (LTA) has said that 99 per cent of front-line public transport workers have completed their first dose of a vaccine.

More than 95 per cent are fully inoculated, and in the light of recent developments, workers have been told to take their meals and smoke breaks alone, regardless of their vaccination status.

Assistant Professor Terence Fan at the Singapore Management University's Lee Kong Chian School of Business, who specialises in transport issues, said another way to minimise risks is to set up plexiglass panels around the bus driver's seat.

The National Transport Workers' Union trialled this measure in the wake of assaults on bus drivers last year. It has not been widely adopted, in part due to continuing concerns that the reflection caused by these panels affected the vision of drivers.

Most commuters interviewed said they were not overly worried about the growing clusters.

Mr Tan Chong Tee, 71, said he usually tries to avoid places where there are Covid-19 clusters, but has to take a bus from Jurong East Bus Interchange five days a week.

The interchange had a total of 28 Covid-19 cases linked to staff members there as at Wednesday.

"There's only so much I can do, I wear a mask and follow the regulations, so if I get it, it can't be helped," said the fully vaccinated factory worker.

Undergraduate Nirmal Kishore, 23, who frequents Tampines Bus Interchange - where there is another cluster with a total of 23 Covid-19 cases - said he tries not to touch surfaces in buses in case they may be contaminated.

"I try to make sure I come into contact only with the bus seat and I'll try not to touch the handles. But I have hand sanitiser with me at all times so it's not much of a concern," he said, adding that he is fully vaccinated.

Read Also
Why is the number of Covid-19 clusters at bus interchanges growing? 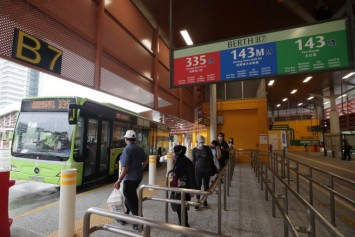 Ms Xue Lianli, 49, a part-time cleaner who works near Jurong East Bus Interchange, said she avoids touching her face while in public areas. "I sanitise after I get off the bus. I still have to come here for work, so I just make sure to wear my mask properly everywhere," she said.

Prof Fan said it is not clear at this point if all the bus drivers were infected by the same strain, and that the situation will be clearer after virologists' analyses.

For those who live together and are close contacts of one another, however, the risk of mutual infection is increased. Even without such factors, the risk of exposure for bus drivers is already "inherently high" as they come into contact with hundreds of commuters every day.

He added, however, that the practice of interlining - where bus drivers ply different routes, sometimes in the same shift - might not be as dangerous as it sounds, as the number of commuters the driver is exposed to remains roughly the same.

"It does not hurt to encourage more instances of working from home in the meantime," Prof Fan noted.

"This can help reduce the number of commuters on buses and slow down any continuing spread."

Dr Leong said vaccinated commuters need not panic, and can take additional precautions such as wearing two masks, or ones that loop around the back of their heads.

"It's simple physics - the tighter the mask to the cheek, the more you breathe in filtered air," he said.

"Bus interchange clusters are highlighted because of contact tracing, but the same scenario may happen to, say, a popular nasi lemak store with many people queueing.

"Some people might ask why (bus interchange clusters did not occur) earlier, but the opportunity had not arisen, the virus was maybe not as transmissible."