Unless Xiong gets a liver transplant soon, he is likely to die.

Unless Xiong gets a liver transplant soon, he is likely to die.

His family's hopes were raised when 13 kind souls stepped up as potential donors, responding to Xiong's wife's pleas for help on social media, online chat groups and in various media outlets.

But these hopes were dashed when all 13 were deemed unsuitable because of underlying health conditions, such as fatty livers and having had Covid-19 within the last two weeks.

His wife, Yu, an engineer in her 40s, who wanted only their surnames to be used, had first received the distressing call last Thursday (July 28), from National University Hospital.

She was told that her husband was experiencing acute liver failure and had lost consciousness.

He had been admitted to the hospital after he complained of a stomach ache for about two weeks.

Doctors had discovered a hole in Xiong's pylorus, which connects the stomach and small intestine.

This caused a dangerous infection to spread in his abdomen, and led to liver failure.

Mr Xiong, also an engineer in his 40s, remains in the intensive care unit and has been reliant on an artificial liver machine, though doctors are uncertain of how long he can survive even with the machine temporarily performing the failing organ's functions.

On Monday, doctors estimated that he could die if he did not receive a transplant within 48 hours.

Just when it looked as if things could not get any worse for the family, they did.

The couple's 11-year-old daughter tested positive for Covid-19 that very same day, meaning Yu was unable to be with her husband even in what could have been his last moments. 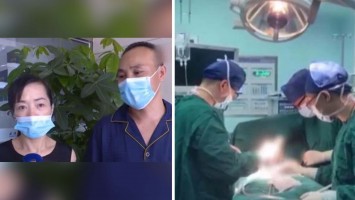 Mr Xiong has now made it past the 48-hour-window, but the situation is still grim.

Doctors say his case remains urgent, and they have also been searching for potential donors.

A suitable donor would need to have an A or O blood type and be above 60kg in body weight, without any prior medical issues.

Neither Yu, nor her daughter, fulfil the donation criteria.

They are permanent residents from China, and Yu has no family around to help.

"My husband is already in the hospital and my daughter had a fever of 39.6 degrees," she told TNP.

"The hospital keeps calling me and I'm unable to even go down anymore as I have to take care of her."

Between multiple visits to the hospital and scrambling for suitable donors, Yu did not have time to properly explain Xiong's condition to their daughter, or keep her fully updated.

It has been a rollercoaster of emotions as Xiong slipped in and out of stable condition, and Yu is worried that she might have left the girl confused and scared in the midst of the chaos.

When asked if she is concerned about the hospital bills for her husband's transplant surgery, she said: "I have no time, no energy to even think about that.

"Perhaps I'll be in debt after, but the most important thing is that I need to save my husband's life first."

For now, she continues to plead with the public: "I really need a suitable donor, a kindhearted person, to please save my husband's life".