SINGAPORE - The editor of The Online Citizen (TOC) Terry Xu Yuan Chen will be charged with criminal defamation on Thursday (Dec 13), along with a man who allegedly wrote an article on the socio-political website about MP Seah Kian Peng, which alleged corruption by government officers.

Although the purported author of the article was one Willy Sum, the police contend it was, in fact, written by Mr De Costa Daniel Augustin, 35, who logged into another person's e-mail account without his consent, and sent the article to TOC. The Straits Times understands that Willy Sum was Mr De Costa's pen name, which he used to sign off the e-mail.

It was only after the police had searched the home of the individual whose e-mail was used by Mr De Costa, and were convinced that the article was not written by the person that they applied to search Mr De Costa's home and managed to reach him just before he was leaving to board a flight.

Mr De Costa allegedly wrote the article titled "The Take Away from Seah Kian Ping's Facebook Post" in response to comments Mr Seah made on Facebook about a meeting between several Singaporean activists and Malaysian Prime Minister Mahathir Mohamad in August. 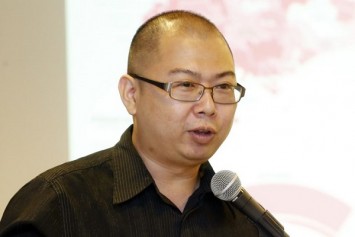 Investigations suggested the article was sent to the website under the Willy Sum name.

Dr Thum had posted on Facebook on Aug 30 about his meeting, saying he had asked the Malaysian leader to "take leadership in South-east Asia for the promotion of democracy, human rights, freedom of expression and freedom of information".

Police said on Nov 20 that the article made serious allegations that "the Government's highest officers are corrupt".

Mr De Costa faces an additional charge of unauthorised access to computer material under the Computer Misuse Act, for logging into an individual's e-mail account without his consent.

Mr Xu then published the article on the website without verifying the identity of the author, the statement added.

The Infocomm Media Development Authority (IMDA) lodged a police report on Oct 5 about the article. Upon receiving the report, the police consulted the Attorney-General's Chambers and were given sanction to investigate.

The police also applied to the courts for, and were granted, a warrant to search the houses of Mr Xu and the person whose e-mail was used by Mr De Costa.

On Nov 20, while searching the latter's house, the police found evidence that the article was not written by the person. The police then applied for a search warrant against Mr De Costa on the same day, and he "facilitated a search at his house" after being spotted leaving for a 3.45pm flight when the police arrived at 2.50pm.

In the statement, the police also responded to two allegations that were made against their actions in this case. First, on how the police had supposedly "over-reached" by seizing the electronic equipment of those involved.

"As part of its investigations, the police had seized electronic equipment including laptops, mobile phones and hard drives from Mr Xu and Mr De Costa. This was necessary to secure and preserve evidence," the statement said.

The police added that the seizure of the electronic equipment from Mr Xu and Mr De Costa uncovered evidence pointing towards the identity of the true author of the article, in this case, Mr De Costa.

Responding, they said: "The police had to act quickly as we had obtained information which suggested that Mr De Costa was the true author of the offending article."

Mr Xu said last month that on Sept 18, the IMDA had ordered TOC to take down the article, and he complied on the same day.

Anyone convicted of criminal defamation can be punished with up to two years in prison, a fine, or both.

Anyone convicted of unauthorised access to computer material can be punished with up to two years in prison, a fine not more than $5,000, or both.