Toddler from My First Skool allegedly 'pinched' on her face and body by teacher, police investigating

Feng Ying's daughter, a two-year-old, returned home from pre-school with injuries to her cheek and her neck.

When parents drop their children off at kindergarten, they expect their kids to be kept safe, and not return home with injuries.

For Feng Ying, 43, when her two-year-old daughter returned home from My First Skool in Bukit Panjang with injuries on March 23, she was mortified.

Speaking to Shin Min Daily News, Feng Ying said: "I was very surprised. I thought it was just an accident, so I didn't want to make a big fuss."

Her husband had also noticed a bruise on her face when he picked up their daughter from the pre-school earlier.

He spoke with the school the next day after dropping their daughter off and he said that the school claimed she had inflicted the bruise on herself because she hugged her water bottle too tightly while sleeping, fearing loud thunder.

"We sent our daughter to school, but she suddenly gained an injury. Not only did the school not immediately inform us, even the teacher wasn't able to tell us why my child was injured," said Feng Ying to the evening daily.

Later that day, their daughter returned home with injuries yet again, this time with red marks on the back of her neck, as if someone had pulled the child's mask straps.

Suspecting that their daughter may have been mistreated, the couple contacted the police, simultaneously suspending her studies with the pre-school.

To their distress, their daughter even demonstrated to the police how she had been "pinched on the face and body by the teacher", Feng Ying said.

Shin Min Daily News reported that a police report had been lodged by the girl's parents and an investigation was underway. 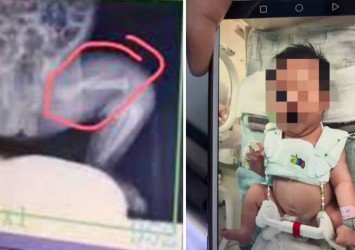 When contacted, NTUC First Campus told AsiaOne that they are assisting with police investigations.

"It is premature to share details of the incident at this point in time," the spokesperson said. "That said, we initiated an internal investigation immediately upon receiving news of the incident and found nothing amiss."

The spokesperson also emphasised that "the safety, health and well-being of every child" is their priority.

"We continue to work closely with all our educators in ensuring the best care for our children." The spokesperson told AsiaOne.

Feng Ying also told Shin Min Daily News that she used to work for the same My First Skool outlet and contacted a former colleague there to find out more.

According to the colleague, another parent had called the police to complain about a teacher but that case was eventually dismissed.

In 2014, a part-time teacher from My First Skool in Toa Payoh was sentenced to three weeks' jail after she was caught on camera roughly handling a child a year prior.

AsiaOne has reached out to the police for comment.