The handicapped toilet on the third level of People Park's Centre would normally be out-of-bounds after 6pm, hence a cleaner's surprise when she discovered inside a pair engaged in sexual intercourse after hours.

"When the door opened, there was a man and a female prostitute, both undressed, going at it. It shocked her so much, her face turned red. She immediately closed the door and ran away," the cleaner's colleague recounted in an interview with Lianhe Wanbao.

Neither party seemed disturbed by the cleaner's interruption and took their time in leaving the toilet, the colleague added.

While the toilet requires a key — held by her and the affronted cleaner — to open, she admits that the lock is easy to undo with a coin, making it a convenient location for prostitutes to carry out their "transaction".

"The woman works at a nearby massage parlour. We suspect she switched locations to the handicapped toilet because the police are very stringent in their checks, thinking that no one would be around at night. She probably didn't expect my colleague to find out about her."

The two cleaners also discovered boxes of new condoms stashed in a corner of the toilet, believed to have been placed there by the prostitute.

Other buildings in the area haven't been spared either.

A cleaner working at the nearby People's Park Complex shared similar observations with the Chinese evening daily.

She said: "When I was cleaning the toilets on the second level last week, a pair in their 30s walked out of the toilet cubicle together." 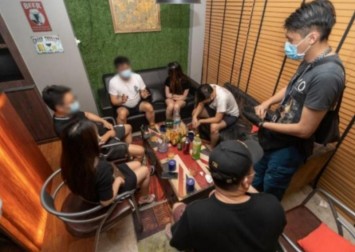 The police have conducted multiple raids against vice-related activities in the past year.

An operation against vice-related activities in both rented commercial and private residential units in June 2020 saw 11 women arrested for offences under the Women's Charter.

In a police statement last October, five massage establishments were found to have provided sexual services during massage services. They involved women, aged between 28 and 38, who were arrested for offences under the Women's Charter.

A 40-year-old woman working in a massage establishment along Geylang was also arrested in December 2020.

Under the Massage Establishment Act, errant massage establishment licensees can be fined up to $10,000, face an imprisonment term of up to two years, or both.