Too young to feel burned out? Gen Zs in Singapore the most stressed, survey finds

Jane (above) told AsiaOne that her first foray into the working world is taking its toll.

It's just three months into her internship at a video production company, but Jane* is already feeling the heat.

With deadlines piling up, starting work at 11am and leaving the office at 9pm is something of a norm these days, the 19-year-old, who declined to reveal her real name, told AsiaOne.

This was a stark contrast to her days as a polytechnic student, where classes would usually end at around 5pm everyday.

Her first foray into the working world is taking its toll, Jane complained. "I feel tired all the time, and I'm not feeling any joy from work.

"I'm just going through the motions [everyday], like being stuck in a rut."

The pressures from meeting deadlines have also extended to her life outside of work.

Drained from the daily grind, Jane shared she would prefer to spend her weekends alone – reading, watching movies, or simply scrolling mindlessly on social media.

But she lamented that her precious downtime these days are spent socialising with friends – something she admitted it's hard to turn down.

Jane said: "I've never cancelled a meet-up, but I've told them that I am present physically, but I won't be very active and responsive.

"My friends told me that they understand, but I'm not sure that they really do. It's made me stressed out to engage with them when I'm not in the capacity to do so."

Too young to be stressed?

Being on the cusp of adulthood with their whole lives ahead of them, you would think that Gen Zs like Jane are the ones facing the least problems – and stress.

But a recent survey by insurance firm Cigna Singapore showed that 95 per cent of Singaporeans aged 18 to 24 – the Gen Zs – are the most stressed here.

In the survey titled Stressed in Singapore - Employer Opportunity, it found that 86 per cent of adults in Singapore are stressed, well above the global average of 82 per cent.

And the Gen Zs are the most stressed - at 95 per cent - and also the most emotionally impacted by stress, with 51 per cent of them saying they became more emotional, and 50 per cent feeling depressed.

The survey, which involved 1,001 respondents, found that top stressors are cost of living, uncertainty about the future, and personal finance.

The prolonged stress can also lead to one feeling physically and mentally exhausted.

The survey also found that Gen Zs are the most likely to experience the symptoms of procrastination and experiencing self-doubt.

The stress from work has also led to a trend known as the "great resignation", Cigna Singapore said in a press release on Tuesday (Nov 22), adding that 35 per cent of the survey respondents have changed jobs in the past year and 34 per cent are looking to switch in the next 12 months.

Read Also
Nearly 70% of employees say 2021 has been the most stressful year at work; employers beef up mental health support 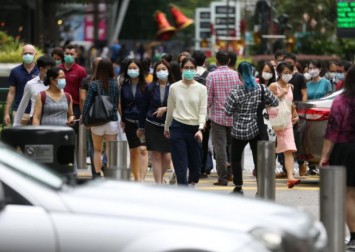 There is also a gap between what employees want from their companies and what they are currently getting.

While the top three "wants" are flexible working arrangements, having flexible "time off" and a comprehensive healthcare plan, the survey found out that they are currently in place at 43 per cent, 27 per cent and 20 per cent of workplaces here respectively.

Cigna's CEO Raymond Ng said: "Employers must recognise that stress impacts the individual, their families, friends and the organisations and colleagues they work with, and offer well-being support that better match employees’ expectations, or risk losing productivity and talent.”

For Jane, the stress from trying to balance work and social life is leaving her with more questions than answers.

"It's an internship, so I'm supposed to not be great at what I do. But this lingering fear that maybe I'm just not set out for this line of work," she said.

Not a snowflake, just more aware

Given how Gen Zs are more likely to feel stressed out than the older folks, the term "snowflakes" is often used on the former.

But Jane feels that using this derogatory label – for people who are deemed "fragile" and "overly sensitive" – on her and her peers is unfair.

Gen Zs are just more aware of what's causing them unnecessary stress, she said: "And it's not a bad thing to voice your opinions and prioritise your mental health.”

Adding that the older generation might see openly sharing about stress and burnout as taboo, the 23-year-old shared that she also hopes for more intergenerational conversations about mental health.

Ng, who described herself as a mental health advocate on social media, said: "It's important to have hope, since the symptoms of mental health issues are depression, as well as feeling hopelessness and loneliness.

"I hope that my audience will feel less alone in their struggles and that they also get to find the strength [to overcome them]."

As for Jane, she remains optimistic that her mounting stress and burnout will soon be a thing of the past.

With two more months till the end of her internship, she said: "I'm going to rest for a few weeks by going on a graduation trip, then I'll find another internship."

ALSO READ: 10 ways to manage stress and burnout at work