It was like a nightmare, waking up to the sight of a topless stranger in your room.

But it was all real for a Braddell View resident.

Caleb Tay had heard a loud noise on Thursday morning (May 27) while asleep and brushed it off, thinking his parents were arguing. Then, he was rudely awoken when a man threw open the door to his bedroom and walked straight to his window.

Today at 8am, a stranger BARGED into our house. He was a fat, tattooed Indian guy, seemingly in his 20s and he was...

Despite Tay yelling at him, the topless stranger paid no heed and instead opened the window, huffing and puffing angrily. He then turned around and strolled out of the apartment, Tay recounted.

Read Also
Man kisses neighbour after sneaking into her flat, even calls police when confronted 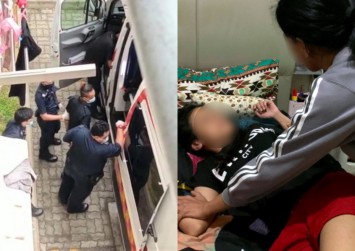 Tay later left his apartment to look for the intruder and met police officers at his block. He was informed that another resident had called the police regarding a break-in in the area, and the same stranger was detained in another unit.

"We still have no clue why he was barging into people's houses or why he came into my house. He made a mess in the kitchen, but thankfully, my parents are not hurt and so far it seems that nothing valuable was taken," he said.

In response to AsiaOne's queries, the police said a 32-year-old man was arrested for criminal trespass and suspected drug-related offences. Police investigations are currently underway.