'Treat yourself to an ice cream': Singer-turned-baker draws flak for response to customer

Singaporeans may have a universal love for free things, but singer-turned-entrepreneur Sarah Aqilah learned the hard way that a $1 ice cream treat was not the way to this disgruntled customer's heart.

Sarah, 36, was lampooned on social media after a series of customer service gaffes was made public in a Facebook post on May 20 by one Hardy Hzn.

Sharing screenshots of his conversations with Sarah, Hardy called her a "rude seller" and detailed his frustrations attempting to order some cream puffs from her home-based baking business.

Hardy had first contacted Sarah on May 11, but only finalised the order and delivery slot on May 13 after delayed replies on her part.

Sarah agreed to deliver the cream puffs on May 17 between 12pm and 8pm. However, the goods never arrived, Hardy said.

When he texted Sarah at about 9pm the same day, she informed him that the delivery driver was "having some difficulties" with the delivery as "something happened" to the cream puffs.

Deciding to give her a second chance, Hardy rescheduled the delivery for May 19.

But there was still no sign of his order. 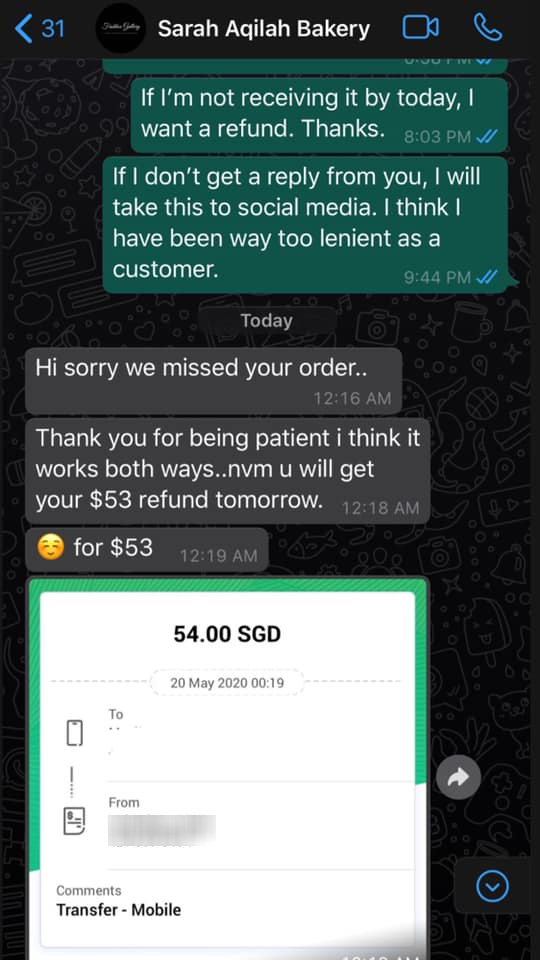 He then asked Sarah for a refund, writing that he had been "way too lenient".

In response, she apologised for missing out on his order, adding that patience "works both ways".

But what drew the most ire from Hardy was when Sarah transferred an extra $1 to him and told him to "take the $1 and treat yourself an ice cream [sic]."

Denying that it was an insult, Sarah added that Hardy should "take it complimentary [sic]." 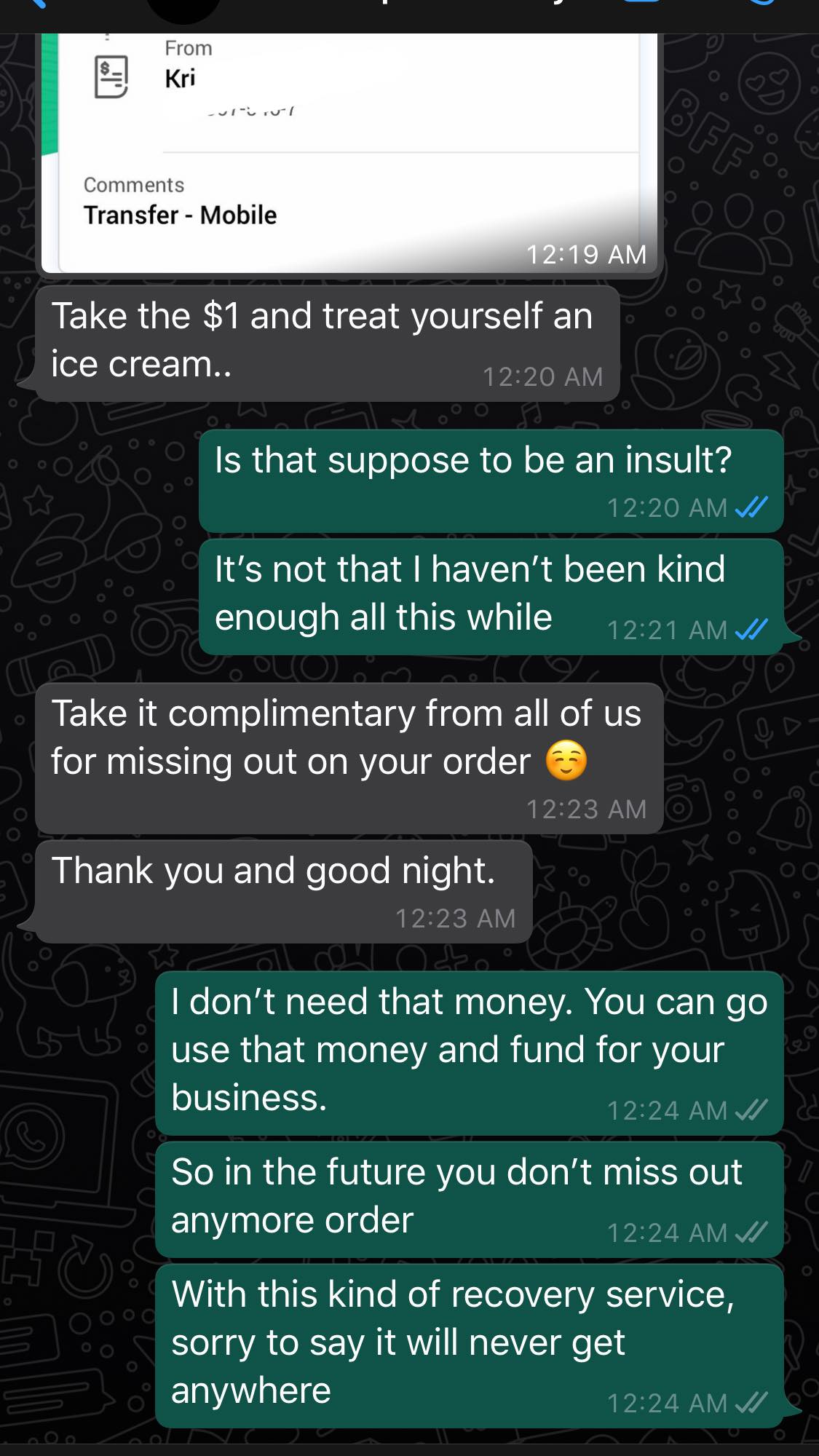 Not amused, Hardy said he transferred the $1 back to her.

He wrote in his post: "Go use that money to fund your business so you don't miss out on your orders anymore."

Sarah's customer service (or lack thereof) had netizens fuming, many of them leaving comments slamming her and complimenting Hardy on his patience. 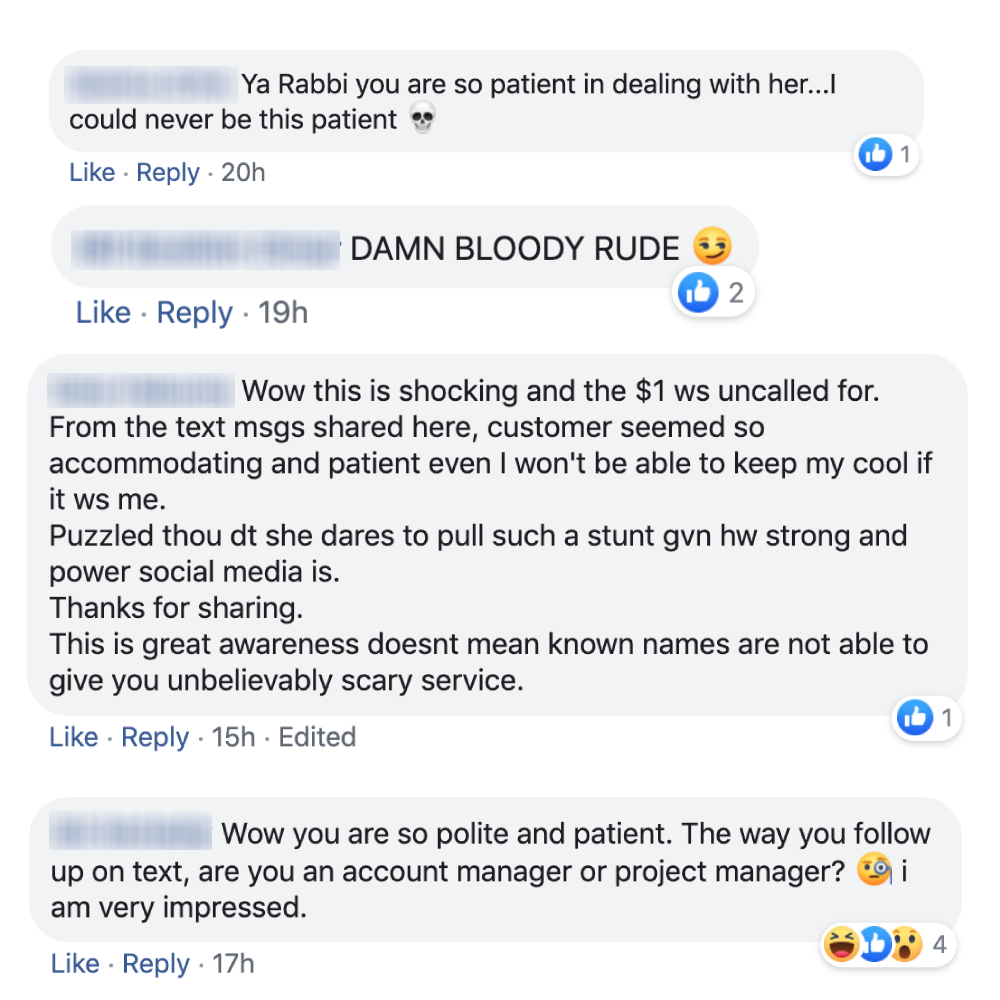 Referencing the backlash and "keyboard warriors" in a defiant Instagram Story, Sarah wrote: "Let them talk 'cos talk is cheap."

She also shared a screenshot of the Protection from Harassment Act (POHA) yesterday morning (May 20).

Under the POHA, a person who threatens, abuses or insults another person with the intention to cause harassment, alarm or distress is guilty of an offence. This includes doxxing.

Sarah made headlines last October when she was fined $30,600 for not paying goods and services tax on branded goods that she had bought overseas.

She had bought the goods in Europe to resell on Instagram.

Before her foray into entrepreneurship, Sarah was a singer and the 2009 winner of Anugerah, a singing competition organised by the Malay television channel Suria.