Oh, how the tables have turned.

A Certis Cisco enforcement officer was suspended after he was spotted smoking at a void deck and casually tossing the cigarette butt aside on Saturday (Nov 21), shortly after he tried to prevent a pair of delivery men from stopping at the loading and unloading bay at Woodlands Avenue 6.

Video clips of his actions were uploaded onto Facebook the same evening by one of the affected delivery riders along with the caption: "Enforcing the law. Breaking the law."

In the first clip, the officer was seen calmly telling the delivery man behind the camera that he was not allowed to park where he was, despite the latter pointing out that he had stationed his vehicle at the loading and unloading bay.

Another delivery rider strode over with a similar complaint, saying that the officer had noted down his license plate number too.

The officer maintained his stance, telling them: "Loading bay is not allowed for delivery. You have to go to the car park. And I didn't tell you that you can't do delivery. I gave you five minutes."

"Then why did you take down my number?" the other delivery rider bit back.

The pair eventually gave up.

Little did the delivery man expect to see the officer again a while later, though a fair distance away. 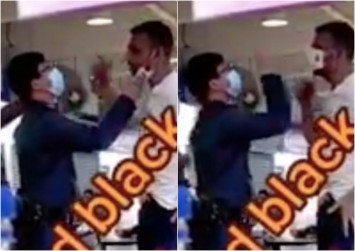 The officer had thrown a regular shirt on top of his uniform and was openly smoking at the void deck before he got up and tossed the still-lit butt onto the path outside.

In response to AsiaOne's queries, Certis said the enforcement officer had been issued with a letter of warning and suspended from all duties. The incident has also been reported to the relevant authorities for further action.

"We are disappointed to learn of an incident that occurred on Nov 21, 2020. Our enforcement officer was filmed smoking and improperly disposing the cigarette butt at Woodlands Avenue 6."

They added: "Certis expects the highest discipline standards from our officers, and they are required to fully comply with these standards and observe the law at all times."

Smoking at the void deck is also prohibited and carries a composition sum of $200, or up to $1,000 if convicted in court.