Student Ryan Lim, 17, was having a nap when he was shaken awake by his younger brother who smelled smoke.

The two boys found themselves trapped upstairs in their bedroom of their two-storey Tampines maisonette flat because of a fire downstairs in their living room.

Their parents were still at work.

When Ryan opened the door, he faced a wall of smoke. He rushed to the toilet and grabbed a wet towel for his brother to cover his nose and mouth.

The Institute of Technical Education (ITE) student said: "My brother was my priority. I felt like I needed to protect him."

The two boys then rushed downstairs, grabbed the house keys and ran out of the house.

The Singapore Civil Defence Force (SCDF) said it responded to a fire at about 6.20pm at Block 125 Tampines Street 11.

The fire, which involved the contents of a living room of a fourth-level unit, was extinguished using a water jet. There were no reported injuries.

Preliminary investigations indicate that a Personal Mobility Device (PMD) battery was being charged when the fire occurred.

Ryan told The New Paper that the PMD, an electric scooter, belonged to him. 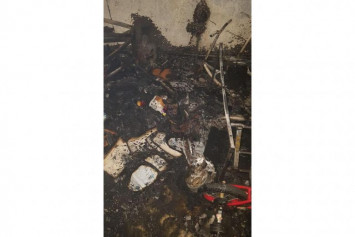 He had bought it about a year ago for about $1,000. "I regret owning and overcharging my PMD," he said.

The primary school pupil said: "I was playing a game on my iPad when I heard a loud bang. I thought it was something else till I smelled the smoke."

The two boys said they were initially too frightened to go downstairs.

Student Andy Yusri, 16, said he followed his father to check on their neighbours when they heard about the fire.

"When I was there, I was panicking because I was scared that someone was inside and they would get hurt," said the Damai Secondary School student.

"My father got them to come down by calling them to run and get out."

Mr Mathan Krishna, 43, a prison officer, said he tried to help fight the fire with some other neighbours.

"Once the boys got out, we tried to fight the fire with buckets of water but it was too strong. It was so bad you couldn't breathe."

The boys' mother, Ms Jennifer Lim, a supervisor in her 40s, said she was very worried when she found out from her husband about the fire in their flat.

She said: "The most important thing is that my kids are safe. I'm very grateful that they came out okay."