A Mitsubishi Evolution 10 at a showroom in Tokyo.

SINGAPORE - Two motorists "playing" with each other on the Central Expressway (CTE) were driving at speeds of about 180kmh - double the speed limit of 90kmh.

Each man was driving a Mitsubishi Evolution 10 sports sedan, and they swerved from lane to lane as they overtook other motorists at about 1am on Oct 14 last year.

They were sentenced to two weeks' jail. They were also disqualified from driving all classes of vehicles for four years. 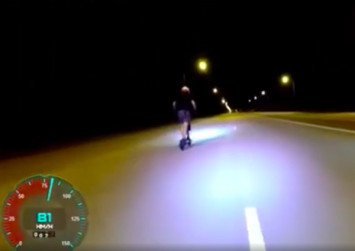 Deputy Public Prosecutor Andre Chong said Chia met about 15 other drivers, including Ng, at a gathering of a "motorcar group" in Loyang at about 11.30pm on Oct 13 last year.

Later, the duo were driving on the four-lane CTE towards Ayer Rajah Expressway at about 1am when they decided to "play" with each other. They began swerving from lane to lane and overtaking several other motorists.

A Traffic Police (TP) officer, Staff Sergeant David Yap, spotted the cars and recorded their speeds with a laser gun.

DPP Chong told District Judge Toh Yung Cheong that Ng was driving at a speed of 184kmh while Chia was going at 178kmh.

Staff Sgt Yap managed to stop Chia's vehicle before an exit at Balestier Road and Chia admitted to his offence.

At about 3am, TP officers spotted Ng's car at East Coast Park and he was later arrested at home.

Before handing down the sentence, Judge Toh said a message must be sent to deter other motorists from committing similar acts.

He added that at the time of the offence, "the road was not empty and there were other vehicles on the road".

For driving their cars in a rash manner, the two men could have been jailed for up to a year and fined up to $5,000.