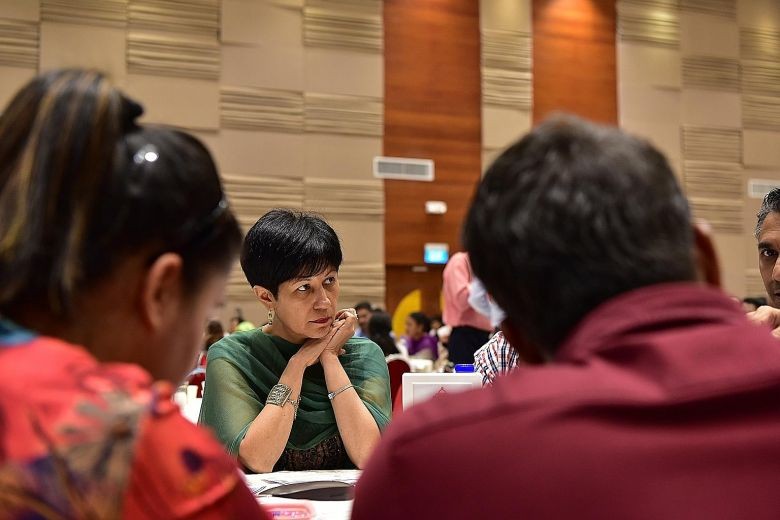 But HDB flat, like any asset, has 'life cycle' over its lease tenure, minister tells PA dialogue

Singaporeans have been able to keep the profit from the sale of their Housing Board flats, and that proves that they are owners, not mere tenants, said Minister in the Prime Minister's Office Indranee Rajah yesterday.

"Everybody who has actually made a profit on the sale of an HDB flat, you cannot say that it's not an asset. Of course it is," she stressed in response to a question from a member of the Indian community at a People's Association dialogue at The Grassroots' Club in Ang Mo Kio on the National Day Rally.

The issue of HDB's 99-year lease was a hot topic at yesterday's session, along with the cost of living and public healthcare - which formed key parts of Prime Minister Lee Hsien Loong's speech on Aug 19.

Together with Ms Indranee, Senior Minister of State for Transport, and Communications and Information Janil Puthucheary and Sembawang GRC MP Vikram Nair addressed questions from around 350 participants from various Indian organisations, and voluntary and grassroots organisations.

One asked whether the 99-year HDB lease means the buyer is really a long-term tenant.

But she also cautioned that like any asset, HDB flats have "a life cycle". She said that during the early part of the lease, the value of a flat would appreciate. "But towards the end, as the lease gets shorter and shorter, the market value will necessarily go down."

This is why the Government has introduced the Voluntary Early Redevelopment Scheme, she said. The scheme, announced by PM Lee in his rally speech, allows residents living in selected precincts and whose flats are older than 70 years old to vote on whether to sell their flats back to the Government before the leases expire.

Another housing issue raised was how the Government's Ethnic Integration Policy, put in place to ensure a balanced mix of ethnic communities in HDB towns, makes it harder for Indians to sell their flats.

They tend to be allowed to sell only to other Indians, and the smaller market means they may have to accept lower prices despite buying the flat at the same price as the other ethnic groups.

Dr Janil replied that if not for the ethnic quotas, neighbourhoods will be segregated by race across Singapore, and this would make the community "far worse off".

It would also not be fair for the HDB to provide subsidies to address this issue, he added.

Dr Janil also addressed questions on the cost of living, particularly the price of mobile data in a time when Singaporeans increasingly need to be connected at the workplace and in schools.

He said that "the essentials of connectivity" such as text messaging, do not require a lot of data. Instead, it is the downloading of videos and games which ends up racking up data costs, he explained.

Several participants also asked whether the Government can financially sustain schemes announced at the National Day Rally, such as the Merdeka Generation Package to help those born in the 1950s with their medical expenses.

Ms Indranee replied that this is dependent on having good governance, good fiscal policy and a good government.

"None of these things would be possible if you do not have a strong economy, if the revenue generated from the economy is not properly spent, saved, invested and grown."