WASHINGTON  - Local authorities confirmed on Friday (Sept 6) that Singaporean Tan Wei was among the 34 victims who died in a pre-dawn fire on a dive boat off the California coast earlier this week.

Her name was one of nine publicly released by the Santa Barbara County Sheriff's Office at a sombre press conference. The authorities said they have positively identified 18 victims so far.

The 26-year-old had recently graduated with a master's degree in engineering from the University of California, Berkeley and started work as a data scientist in Santa Barbara in June.

She was listed by the Sheriff’s Office as residing in Goleta, a coastal town of 31,000 next to Santa Barbara.

Ms Tan Wei’s older sister, Cheerin Tan, 29, had previously told The New Paper and CNA that DNA samples confirmed that her sister had died on the boat. 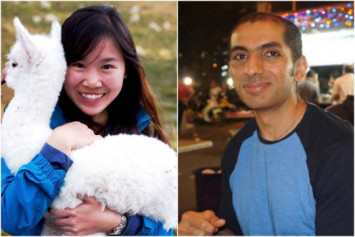 She also told CNA that her sister’s friends in the US would be attending a memorial on Friday. Their father will fly to Santa Barbara to be with their brother Sejay, 31, who is already there, and to make arrangements for the cremation on Saturday, she said.

Officials made no mention of the other Singaporean victim, research scientist Sunil Singh Sandhu, 46, but said that they were in the process of confirming the identities of more victims and informing their next of kin. As of Friday afternoon, the remains of 33 of the 34 victims had been recovered.

The Conception, a 23m-high vessel, had been on a three-day dive trip to the Channel Islands when a fire broke out around 3.15am (6.15pm Singapore time) on Monday, trapping 33 passengers and one crew member sleeping below deck. Four crew members who were above deck escaped, and were rescued by another boat.

Santa Barbara County Sheriff-Coroner Bill Brown said his office had connected with family members of all 34 victims, who lived across the country and the globe. One family was in Singapore, another family flew into Santa Barbara from India, and the mother of another victim lived in Japan, he said.

“This list is representative of the diverse makeup of the passengers and crew who were aboard the Conception on that fateful day. They were from our local area and from throughout California, from across the US and from around the world. Their tragic loss has devastated countless family members, loved ones, friends, and colleagues,” said Sheriff Brown.

“We mourn their loss and we want to assure those who they leave behind that we will continue working tenaciously to recover all of the victims, to determine how they died, and to investigate the cause of this terrible fire and the loss of life, with the hope that future such tragedies can be prevented,” he added.

Mr Brown said that smoke inhalation was likely the primary cause of death, and that the preliminary findings from the pathologist indicated that the victims had likely died before suffering burn damage.

The burn damage to the victims appeared to have occurred after death and not before death, he said.

“The indicators are, from the preliminary examination of the bodies, that the victims died prior to being burned. That’s what we can say with some certainty,” said the sheriff.

The victims could therefore have already been dead by the time the boat’s crew discovered the fire and tried to rescue them, he said in response to a reporter’s question.

A preliminary report on the fire will be out next week, though the full findings on the cause of the fire could take one to two years.