Scroll to the end of this article to find out how you can win a GrabFood voucher!

It may be the lunar seventh month, but what you should be afraid of is not ghosts — it is vampires.

Vampire electronics, that is.

These devices, which are on standby mode 24/7, leech energy even when you are not using them.

They continuously consume energy in the background to perform updates, connect to remote servers, document data, and respond quickly to commands.

So, the more wired up and connected you get, the more vampires you end up inviting into your home.

According to national grid power operator SP Group, standby power accounts for up to 10 per cent of total household energy usage. With the Energy Market Authority's (EMA) regulated electricity tariff at $0.2097 per kWh (July 1 to Sept 30, 2020), that is over $150 million worth of vampire power going down the drain, and that can easily be reduced with a change to an Open Electricity Market (OEM) retailer, such as Senoko Energy.

In another study, researchers found an average of 65 vampire power loads in homes.

Some of the top idle power consumers include devices in standby mode (such as washing machines), electronic devices in sleep mode ready to power up as soon as commanded (such as entertainment consoles), and those left fully on but inactive (such as desktop computers).

With the number of households in 2018 at 1.33 million, that works out to $110 worth of vampire power usage per household on average, which could go up to $600 depending on your property type.

That amount of lost idle power of approximately 2876kWh is equivalent to leaving a television on (400Wh) for over 7,000 hours or enjoying the air-conditioning (555Wh) for over 5,000 hours straight!

Yes, vampire power sucks, and with most of us still working from home, that means even higher electricity usage.

But enough of the bad news, we have some good ones. Eliminating vampire power and saving on energy (and money!) can be as easy as just pulling a few plugs. Literally.

Switch off household appliances such as television set-top boxes and entertainment consoles at the socket when they are not in use.

You can even use a power strip to hook up several devices so it would be less of a hassle to switch them off one by one.

Go a step further by pulling the plugs off the sockets to make sure no sneaky vampire is still leeching energy.

Switch to energy-saving devices, especially for those that are required to be switched on for long periods, such as air-conditioners and certain lighting.

For air-conditioners, look for the National Environment Agency's (NEA) Energy Labels — the more ticks, the more energy-saving it is.

As for lights, pick compact fluorescent lamps and LED bulbs over old-school incandescent lamps — LED bulbs use over 75 per cent less energy than the latter.

To maximise savings, switch out your electricity retailer — four in 10 households have already done so since the launch of the OEM in 2018.

By switching to Senoko Energy, you can enjoy their fixed-rate plan from $0.17 per kWh — an almost 19 per cent discount from EMA's regulated electricity tariff of $0.2097 per kWh.

Further stack your savings and get up to $130 bill rebates when you set up a recurring bill payment with any Citi Credit card.

Here is a calculation on how much savings you can get with Senoko Energy's 12-month and 24-month fixed-rate plans. 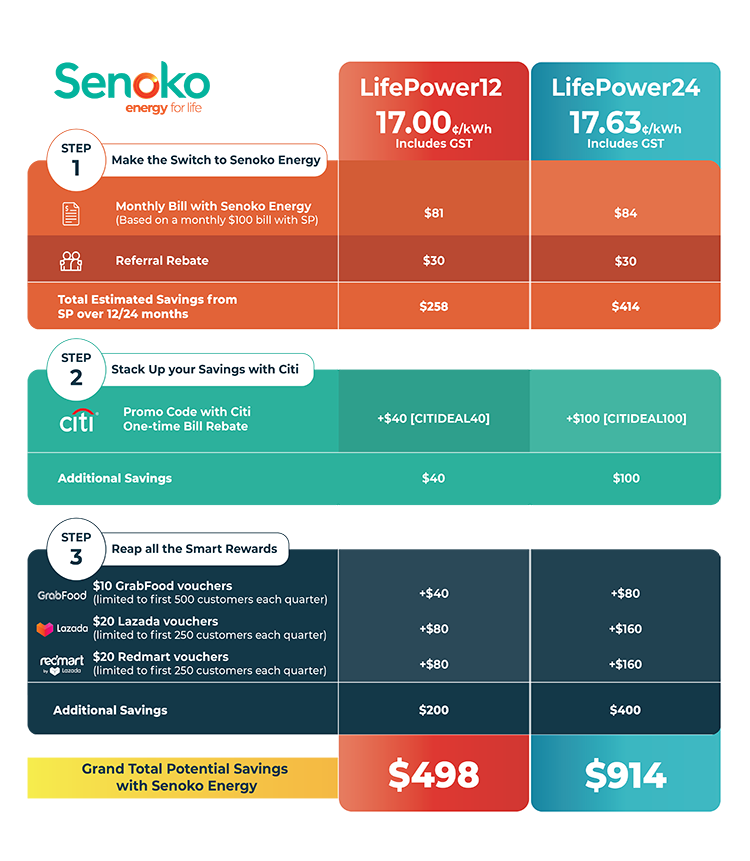 As a Senoko Energy customer, you can also save more with their rewards programme, such as the redemption of free monthly e-vouchers from GrabFood, RedMart, Lazada and the like.

Making the switch from SP Group to Senoko Energy is a fuss-free one-time process that can be done online in 10 minutes. Best of all, no admin fees nor security deposits are involved. Just pick a plan, register your account, upload a copy of your latest electricity bill, and voila — savings.

Become a Senoko Energy customer by Sept 30 and you can even stand a chance to win Sonos Five speakers and more in their lucky draw. For more information, visit their website.

This article is brought to you in partnership with Senoko Energy.