Kids will be kids, but how far is too far?

What seemed like mindless fun was perhaps taken a step too far by pupils, apparently from primary schools in Tampines.

They are joined by others who seem to be from Junyuan Primary School as they throw floorball sticks, among other things, at one another.

One of the videos shows a young boy in Yumin's red shirt and black shoes, running along the roof. Another pupil, a girl apparently also from Yumin, stands on the ground and flings an unidentifiable object at him.

As the object she threw upwards hits the roof, a loud crash is heard.

More crashing sounds can be heard later on, although the reason behind these crashes are not seen in the video.

Another video shows the same girl walking on the roof, and the boy from before is now on the ground, joined by two pupils in Junyuan Primary School uniform, whose white shirts have the school name emblazoned on the back.

One of the Junyuan pupils attempts to throw a neon yellow floorball stick at the girl on the roof, and the Yumin boy follows suit. Both of them fail to hit the girl, whom they are aiming at.

Another Junyuan pupil manages to throw a floorball stick onto the roof, narrowly missing the girl standing on the roof. The roof is about 2.2 to 2.4 metres from the ground.

While their actions can be taken as harmless childish antics, some viewers felt this was fun taken too far.

Madam Chiam Chi Yee, the director of a tuition agency, said that while their actions seemed playful, the children had crossed the line by acting dangerously.

Read Also
Pre-schoolers walking barefoot in fire drill at Sin Ming has some people asking 'is this acceptable?' 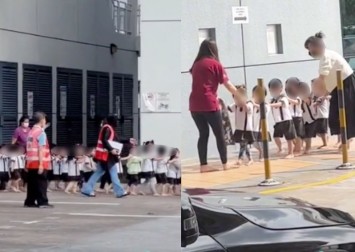 "They should not have climbed up there," said Madam Chiam, 59, adding that she was shocked to see the lack of security features preventing such an incident from occurring.

Ms Clara Choo, 19, said: "That's so unsafe! What if they fall, or if it collapses on someone below?"

The student added that the children were being irresponsible by not caring for their own safety, but also endangering the safety of others around them.

Tutor Ye YaJuan was shocked at the recklessness of their actions.

Mr Ye, 41, said: "The children should have been taught not to expose themselves to dangers like this, especially as parents are now often busy working and unable to supervise them."

He added that schools have the responsibility to educate children on safety, and that members of the public should have come forth and stopped them.