A public garden next to the Natural History Museum in Vienna, Austria, August 13.

Vienna, the capital of Austria, has displaced Melbourne as the world's most liveable city, according to the latest survey by the Economist Intelligence Unit.

After seven years at the top, the Australian coastal city was displaced by Vienna, which ranked ahead of Melbourne by just a fraction of a point. Relative stability across much of Europe improved Vienna's security scores to push it to the top.

Osaka in Japan ranked third out of 140 cities that were scored. Calgary in Canada came in fourth, with Australia's Sydney in fifth place.

One year after overtaking Hong Kong in the rankings, Singapore slipped back behind its Asian rival to come in at 37 on the list. Hong Kong ranked 35th, pipping Singapore by 0.1 point. 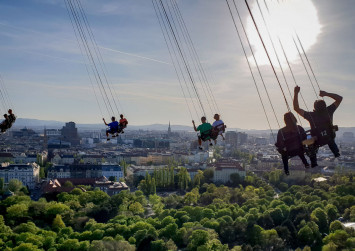 Hong Kong's ranking fell dramatically in 2015 due to heightened fears of unrest as part of the so-called Umbrella Revolution, but has largely recovered now, the Economist Intelligence Unit wrote.

Singapore's score improved in the public healthcare category, where the city-state achieved the highest possible score, the report said.