An annular eclipse in progress at Pyramid Lake in Nevada, the United States in May 2012. In such eclipses, the moon covers the sun but leaves a ring of fire around it.

SINGAPORE - A rare "ring of fire" will be visible on Boxing Day afternoon as the annular solar eclipse returns to Singapore skies for the first time in 20 years.

Areas in the southern half of Singapore, including Sentosa, Jurong, Bukit Timah and Changi, will be able to witness the phenomenon from about 11.30am to 3.20pm on Dec 26.

The Moon will cover about 94 per cent of the Sun's surface leaving its outer edges visible in a "ring of fire" from about 1.22pm to 1.24pm.

The Astronomical Society of Singapore, in collaboration with the People Association, is hosting a viewing party at PAssion WaVe @ Jurong Lake Gardens from 11am to 4pm and setting up telescopes and binocularswith filters for enthusiasts to witness the rare sighting.

There will also be a live screening of the annular solar eclipse in a sheltered open area.

President of the Astronomical Society Singapore Albert Ho said: "Our main issue is with the weather, it's been raining consistently over the past week but hopefully we'll still be able to see (the annular solar eclipse)."

Organisers said that participants are to seek shelter in the event of a lightning risk, and if it is too cloudy to see the eclipse, they can take part in complimentary water sports. 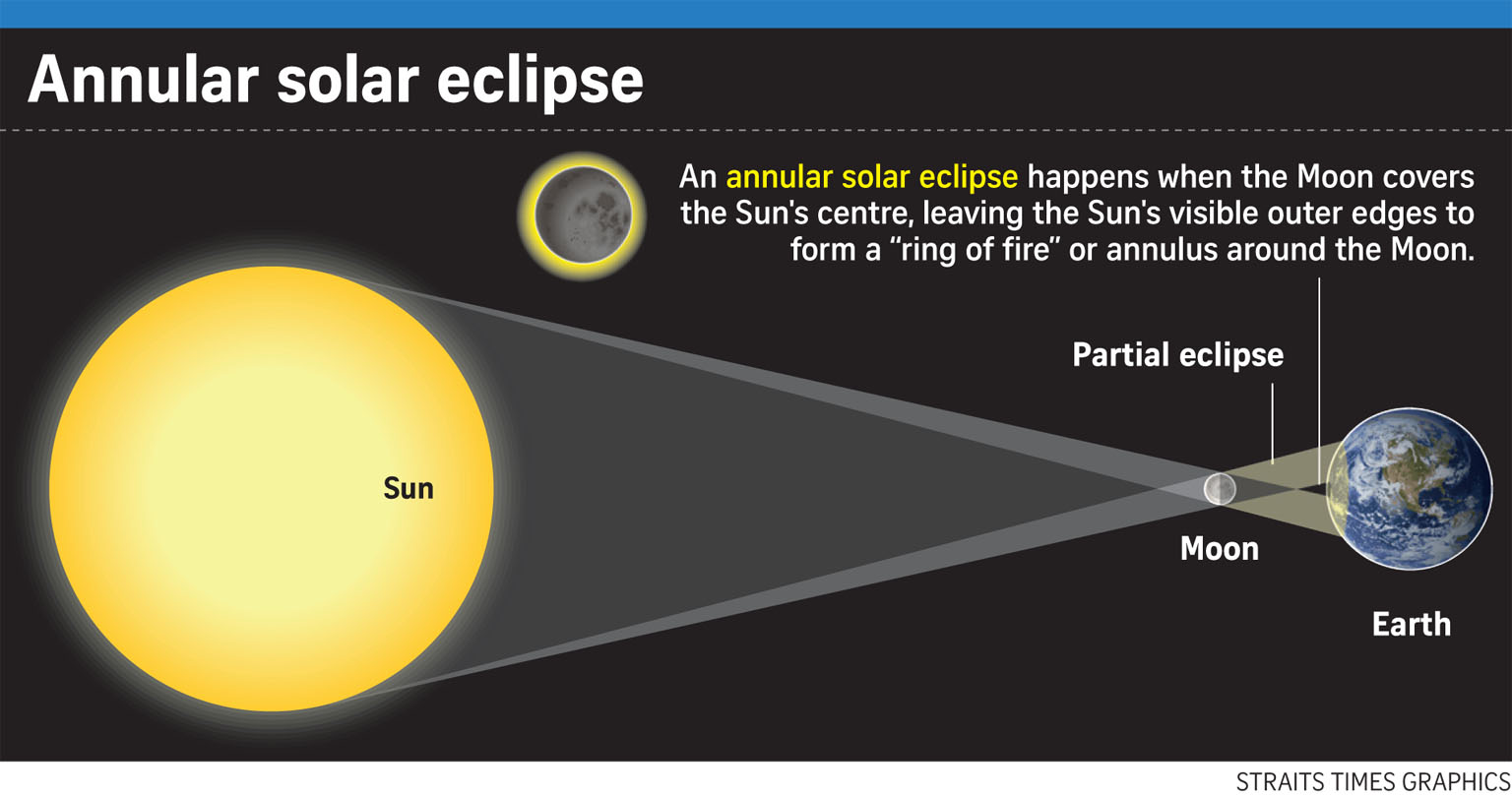 When asked where the phenomenon can be best viewed from, Mr Albert Ho said: "If you are outside of the path of annularity, which is where the full annular eclipse can be seen, you will see less and less of the eclipse as you move away from this path.

"Hence, the southern half of the island is better for viewing the eclipse but then again, Singapore is so small that there will be very little difference even if you were to watch the eclipse at the northern half of Singapore."

He warned that it will be dangerous to look directly at the ring because the Sun would still be too bright.

Solar filter glasses, which can be bought from Science Centre Singapore, should be used to view the phenomenon safely.

The last time an annular solar eclipse of a similar magnitude was visible from Singapore shores was on Aug 22, 1998 when about 83 per cent of the Sun disc was blocked.

The next annular solar eclipse to be seen from Singapore will be in 2063.

- At 11.27am, Singapore will experience a partial solar eclipse, where the Moon blocks part of the Sun and gives the appearance of a dark shadow on the Sun.

- At 1.22pm, this will evolve into an annular solar eclipse, when the Moon crosses directly in front of the Sun.

- At 1.23pm. the eclipse will reach its peak as the Moon will be closest to the Sun's centre then.

Although solar eclipses happen somewhere around the world yearly, not all of them are visible from Singapore due to a mismatch in the location and timing of the events and the rotation of the earth.