Travellers arriving at Changi Airport's Terminal 1 on Jan 30, 2020. All travellers arriving from mainland China who had been there in the past 14 days, as well as anyone with a China passport, will be barred from entry or transit in Singapore. The new measures will kick in at 11.59pm on Saturday (Feb 1).

SINGAPORE - All travellers arriving from mainland China who had been there in the past 14 days, as well as anyone with a China passport, will be barred from entry or transit in Singapore, as the nation ramps up measures to keep the Wuhan virus at bay.

Singaporeans, permanent residents and long-term-pass holders can return, subject to a leave of absence of 14 days, said Minister for National Development Lawrence Wong on Friday (Jan 31).

"On top of everything we've already introduced, this will enable us to limit the number of new imported cases here and reduce risk of community spread in Singapore," he said at a press conference on Friday.

"The situation remains fluid, it's constantly changing, and we do not rule out taking further measures," added Mr Wong, who is co-chair of the multi-ministry task force tackling the spread of the Wuhan virus here.

The tough new measures come on the heels of the World Health Organisation's (WHO) announcement on Thursday that the coronavirus epidemic in China now constitutes a public health emergency of international concern (PHEIC).

The virus has now infected over 9,000 people - surpassing Sars, which had over 8,000 infections. It has killed over 200, with China's Wuhan city at the epicentre of the crisis.

There is no community spread of Wuhan virus within Singapore, Mr Wong stressed, and the authorities are doing everything possible to reduce the risk of this happening.

Limiting the number of new imported cases here is a key part of this effort.

As of Thursday, 13 people had tested positive for the virus in Singapore. All were travellers from Wuhan.

The authorities will suspend issuing visas to those with China passports with immediate effect. 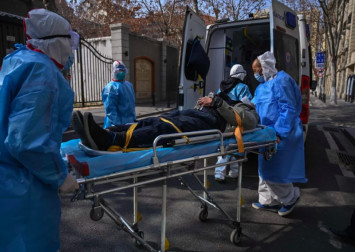 Appeals will be looked at on a case-by-case basis, for instance, if a person holding a China passport has been living elsewhere.

Immigration and Checkpoints Authority officers will also check the travel history of travellers to ensure that they have not been in China in 14 days. If so, they will be prevented from entering Singapore.

The WHO believes that it is still possible to interrupt the spread of the virus, provided that countries put in place strong preparedness and response measures, and there has been increased action worldwide to limit global spread by restricting the entry of possible contacts and cases into other countries.