Watain's anti-Christian messages not something Singapore could tolerate, says Shanmugam

Swedish black metal band Watain mingling with fans on March 7, 2019, after their performance was cancelled.

SINGAPORE - Minister for Home Affairs and Law K. Shanmugam on Saturday (March 9) elaborated on why authorities cancelled a concert by Swedish black metal band Watain, saying its anti-Christian messages were something Singapore could not tolerate.

"I saw (Watain's) lyrics - its four-letter words on Jesus Christ, on Christianity, on religion, abusing the cross - everything that is so far out that I can't see how we could have agreed to it," he said.

He brought up the issue at a Dadah Itu Haram event to thank volunteers who have been spreading the anti-drug message in the Malay-Muslim community.

He said the matter was "not directly related to the community" but something important and which the community should understand and discuss openly.

Mr Shanmugam said that in dialogues with Christian preachers, they have told him that "you are very, very strict when it comes to anti-Muslim, anti-Islamic messages", including the banning of a Danish cartoon and the book The Satanic Verses, which some would say was literature. 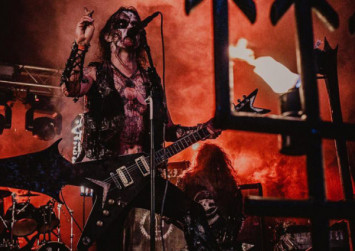 "They said what these people (Watain) are saying is far worse, it is a hundred times worse about Christianity - how come you would allow that? ... They said you treat the Muslim community differently than the Christian community".

Said the minister: "I looked at it and I thought that there is some truth to what they say, I won't say that it is completely true but it is an approach."

He highlighted a photo, posted by the band on its Facebook page as it criticised the cancellation, which showed "mainly young Malay men showing the one-finger sign with Watain".

"I think they went to the concert, got angry, they are all showing the one-finger sign. In a multi-racial society, they don't understand that the concert is anti-Christian, it criticises Jesus and Christianity and churches and they talk about burning churches and so on," he said.

"You have a group of Malay young men, showing the one-finger sign, supporting the group. Next time you will have the Christians doing the same thing."

Young Singaporeans must be educated "that you treat others the same way that you are expected to be treated", he said.

"If we had a concert like this about Islam, there is no way we would have allowed it. If a group of Chinese went and showed the finger sign and said that we should allow it - how would you all have felt? It is the same."

He urged the audience to go see the photo, which is "going viral across the Christian community".

"They won't realise that this a small group of Malays, but they may think, is this what Muslims think of us? So now we have to send the message that this is not what the Muslim community thinks. These are black metal group supporters, they are not the mainstream community."

On Friday, the National Council of Churches of Singapore expressed its appreciation to the Ministry of Home Affairs and Mr Shanmugam for banning the concert.

In a letter addressed to the minister, NCCS president, Bishop Terry Kee said the council shares the ministry's "serious concerns over what Watain represents and stands for" and it fully agreed with the assessment that the band's history of denigrating religions and promoting violence has the potential to cause enmity and disrupt Singapore's social harmony.

In a letter posted on Saturday on the Roman Catholic Archdiocese of Singapore's website, Archbishop William Goh wrote: "No religion, organisation or form of art should be permitted to incite hatred, violence and disrespect for others.

"We must be wary of those who promote a culture of death, suicide, individualism, intolerance and promiscuity, and sow seeds of hatred, division and rebellion in the minds and hearts of our people, especially the young."

Malay Youth Literary Association 4PM president Izzuddin Taherally said on Saturday that while Singapore has progressed far in building a harmonious society of many religions, it is still a work in progress.

"Islam teaches us to respect other religions, so that the respect can flow both ways. Sometimes, there are a a small group of people who may not understand that their actions may impair the harmony that exists. Their actions do not represent any section of the community, including Muslims."

#Religion #concerts #K Shanmugam #In Case You Missed It