Water streaming down from higher floors at Jewel Changi Airport on April 26, 2019, after a sprinkler was activated.

SINGAPORE - A sprinkler was activated in Jewel Changi Airport at about 1am on Friday (April 26), causing "water leakage" at several levels of the development.

Facebook user Loh Boon Kwang uploaded two videos showing water streaming down from higher floors, as well as pools of water gathering along some walkways and in front of an escalator.

In response to queries, a Jewel spokesman confirmed the incident and said that the issue was quickly attended to and resolved with minimal impact to operations. 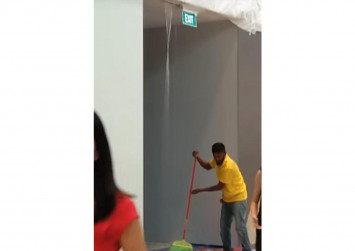 Some netizens who shared the video joked that it was a second waterfall.

This was a reference to the HSBC Rain Vortex at Jewel, which is the world's tallest indoor waterfall, and features water falling through the roof at a velocity of 10,000 gallons per minute.

Earlier this month on April 13, an issue with a sprinkler at Jewel resulted in water leaks on the third day of its public preview.

Videos of the incident were shared widely online over the weekend, including one titled "Waterfall at Jewel Airport", showing visitors looking on curiously as water gushes out from the ceiling.

Jewel, a mega-mall addition to Changi Airport, officially opened its doors to all last Wednesday after several days of public previews.

Located next to Changi Airport Terminal 1, it is connected to T2 and T3 via air-conditioned travelators.

It houses, among other things, 280 restaurants and shops and a big terraced garden called the Forest Valley.