'We are really unlucky': Moneylender in Jurong robbed twice in 5 months

SINGAPORE - It was deja vu when staff at a Jurong East moneylender experienced the second robbery at their shop on Monday (April 12), just five months after the first.

The November case involved a knife, with the culprit pulling the hair of an employee at OT Credit while holding the weapon. He fled with $48,000.

The stakes were even higher in Monday's case - Aetos officer Mahadi Muhamad Mukhtar, 38, is said to have robbed OT Credit while armed with a revolver. He allegedly took $24,000.

When The Straits Times visited the unit at Block 135 Jurong Gateway Road on Thursday, an employee, who declined to be named, told ST: "I just think we are very unlucky."

The second robbery took place after tighter security measures were taken by the shop, including the installation of a new alarm system.

The employee said the shop is working with the police to further increase security, but did not elaborate, citing safety reasons.

Read Also
'I got gun in my pocket': Aetos officer arrested after robbing Jurong shop of over $24,000 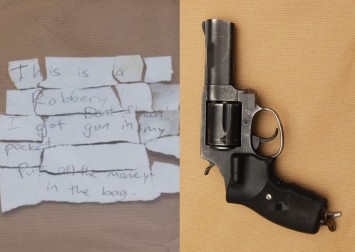 The two cases have also caused concern to a neighbouring shop, NBL Money Transfer, whose staff on Thursday urged the authorities to step up patrols and checks in the area.

"It has happened twice here within five months," Madam Lutfunnesa Shahanaz, 53, the money remittance shop's assistant operations manager, told The Straits Times, noting the use of a knife in the first case and the alleged perpetrator's possession of a gun in the latest case.

The shop's staff also said they did not hear any commotion during the latest incident, which is said to have taken place at about 3.30pm on Monday.

Madam Shahanaz added that in her shop, glass panels separate the staff from the customers, giving them added security.

The unit also has multiple closed-circuit television cameras which send live feeds between the outlet and another one.

"We are more scared this time because we didn't think it would happen again," she said.

"Hopefully the police can send more officers to check outside the shops," she added.

On Wednesday, Mahadi was charged in a district court with armed robbery.

The police said in a statement earlier on the same day their preliminary investigations revealed that staff at OT Credit were shown a handwritten note that said: "This is a robbery, don't shout. I got a gun in my pocket. Put all the money in the bag."

The staff purportedly handed him more than $24,000 in cash before he fled.

Mahadi was allegedly carrying the revolver during the robbery but did not reveal it to the staff and is believed to have acted alone, said the police.

He was arrested within five hours of the robbery, and if convicted of armed robbery, he will face life imprisonment and at least six strokes of the cane.

He  purportedly deposited part of the stolen cash in the bank account of his friend – Nur Shana Mohd Taib. The 34-year-old, who allegedly received $10,000, was also charged on Wednesday with one count of receiving stolen property.

The police have arrested eight other individuals, aged between 16 and 48, in relation to the robbery.

In the November robbery, Kotta Kumar Jeswanth, 19, was sentenced in February this year to undergo reformative training for a minimum of one year.

This means that he will be detained in a centre and made to follow a strict regimen that includes foot drills and counselling.

During the crime, Kotta had held a karambit knife in his right hand as he pulled the hair of an employee using his other hand. He and his alleged accomplices eventually fled the scene with the $48,000.

The cases involving three other men, who are allegedly linked to the robbery, are still pending.