While most of them are thrown away by cleaners in the morning, a group of people have gone around neighbourhoods late at night, scavenging the fruits left behind by devotees.

Daniel Tay, 41, is a freegan in Singapore who recently organised and led a small group of people on fruit hunts in Bishan and Ang Mo Kio.

Freegans reject consumerism and seek to help the environment by reducing waste. One way of doing so is to collect edible food or usable items that have been discarded.

Tay wrote in a Facebook post today (Sept 3) that they collected more than 200 fruits over the past two nights, the majority of them oranges. Other fruits included pineapples, apples, bananas, rambutans, and langsat.

But before you assume that the freegans just grabbed the offerings off the side of footpaths, Tay said that he had consulted a Taoist priest before starting on the activity.

In his Facebook post, Tay also shared what he learnt about the tradition that is observed by Buddhists and Taoists during the seventh lunar month.

"Offerings can be removed after the lighted incense (has finished burning). Say a word of thanks and accord a bow of respect.

"Don't take them while the incense is still burning. It's very rude to take food away from those who are still eating it."

After the spirits were done 'eating', the group bowed their heads in respect and offered their thanks before taking the fruits and placing them in a shopping trolley.

"As a true freegan, we collect whatever is unwanted by others. We say thank you, and proceed to use it for our own needs and wants," he explained.

I decided to do an impromptu Orange Hunt with a friend last night. Since we could smell burning in the air, as opposed...

Although it was quite tiring going around the neighbourhood collecting the fruits, participants said that they felt satisfied by the activity.

The group then split up the produce, which they would later share with their families, friends, and neighbours.

An undergrad who took part in the fruit hunt said that he hopes Singaporeans can be more open to the idea of freeganism. 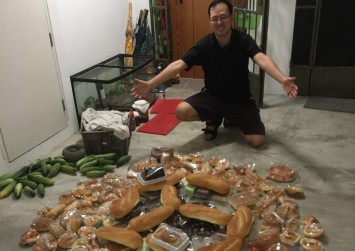 "We collected these fruits not because we're cheapskates. We want to salvage these fruits which would otherwise be thrown away and contribute to food waste in Singapore."

Tay told 8World that he first started the activity during the seventh lunar month last year.

He tried to get more like-minded people to join him this year, but quite a number of them voiced reservations. They were worried that they would offend the spirits by doing so.

While not wasting food is a worthy cause, it may be some time before Singaporeans are comfortable with collecting discarded food, especially those left behind by the "good brothers".