'We just wanted to get home': Singaporean woman and family bumped off overbooked plane in Istanbul

The issue of overbooking has been in the spotlight, with Case president Melvin Yong calling for its regulation. PHOTO ILLUSTRATION: Pexels

SINGAPORE - A freelance designer was looking forward to returning to Singapore - after attending a friend's wedding in Greece - so her heart sank when she, her husband and four-year-old son could not board a flight in Istanbul that was overbooked.

After spending 11 days in Greece, they were due to return on Sept 11, after transiting in Istanbul, but had to stay in Turkey for 24 hours along with 14 other passengers when they were told at the last minute that the plane was full.

Speaking to The Straits Times on Wednesday, the woman who wanted to be known only as Mrs Koay said her family was tired as it was about 11pm when airline staff said the flight was overbooked, and that they were on a standby list.

She added: "My heart literally sank. I didn't bring my younger son on this trip, so I was really looking forward to getting home, and we had plans for people to pick us up at the airport and have dinner. We had other plans for the next few days after coming back and so we had to replan some of these things."

Her family was also given a free change to a flight the next day and a hotel stay for the night, Mrs Koay said.

"At that point, we just wanted to get home and even if you offered me like €1,000, I would still rather have got on board," she said.

Read Also
'I'm in a tough spot': Over 100 passengers unable to board overbooked cruise ship 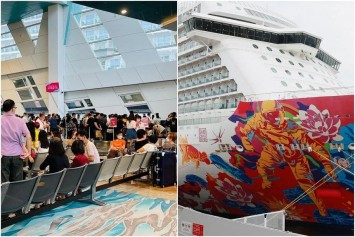 The issue of overbooking has been in the spotlight, with Consumers Association of Singapore (Case) president Melvin Yong calling for its regulation, after more than 100 customers could not board the Genting Dream cruise ship here on Sept 4.

On Tuesday, he told ST that while the practice of overbooking is not unusual, the compensation offered by service providers may not address the concerns of consumers. Case has received seven complaints related to the overbooking of air tickets and cruises since 2019.

One of them was a man who was informed two weeks before his cruise was scheduled to depart that it was overbooked. Although the operator offered credits for future sailings, he was unhappy as he could take a vacation only once a year and had been looking forward to spending time with his wife.

Mrs Koay also had to endure other inconveniences.

Though the family wanted to collect their luggage, they were told it would be an hour's wait so they decided against it.

They had to travel for an hour and a half to a hotel that was in the middle of an industrial area and whose amenities were subpar, said Mrs Koay.

After sleeping there for a few hours, they decided to fork out money to get a room in a hotel at the airport.

During lunch that day, Mrs Koay's son, who was sick, vomited on her and she had to buy him new clothes given that their luggage was not with them.

Mrs Koay, who had to reschedule a meeting with a client for an urgent project too, said of her overbooking experience: "I just wish it didn't happen this way. We had a lovely holiday in Greece, and this... ruined it all."