In a statement on Wednesday (July 31), the MAS said it is aware of the website that had fabricated comments attributed to ESM Goh, who is also a senior adviser to the authority.

The site asks readers to make a minimum initial deposit of $250 into a purported trading platform, Bitcoin Loophole, which would automatically initiate trades on their behalf.

The MAS said that the statements made by the website are either false or have been taken out of context and used in a misleading way.

Members of the public are advised to be cautious and avoid providing any financial or personal information on the website, or on forms linked to it, it added.

Anyone who suspects that an investment could be fraudulent or misused for other unlawful activities should report such cases to the police. 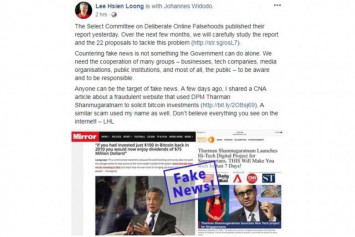 The authority noted that in the past year, there have been other websites that fraudulently used the names and photos of ministers, including MAS chairman and Senior Minister Tharman Shanmugaratnam, and other prominent public personalities to solicit bitcoin investments.

MAS first warned the public against falling for the fabricated comments attributed to Mr Tharman on Sept 18 last year.

In a screenshot of the website, a headline for an article reads: "Tharman Shanmugaratnam Invests $1 Billion for All Singapore Residents. Use HIS Method To Become Rich In Just 7 Days!"

The article also describes him as a "venture capitalist" who announced that Singapore is stepping into the bitcoin cryptocurrency market.

MAS said the statements were "completely false, apart from his observation that trading volumes in cryptocurrency are low in Singapore".

A day later, MAS flagged a second website that was found to be using similar fake comments.

Manpower Minister Josephine Teo took to her Facebook page in May to warn the public against a fraudulent website that attributed comments to her in order to get users to sign up for an online platform.

Users were also asked to provide their credit card or bank details and to make a deposit.

Calling the website "highly deceptive and misleading", she added that it mixed some facts about the updated Employment Act to trick readers into believing the whole post. 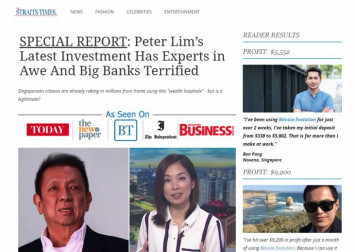 In May this year, an advertising scam bearing Singapore billionaire Peter Lim's name also resurfaced, claiming to be written by "Straits Times" and promoting a "new secret investment".

The advertisement appeared on online selling platform Carousell, which has since taken steps to remove it, and also proactively block fake news ads.

In 2017, Mr Lim lodged two police reports after his name and images were used in online scams.

More information on cryptocurrencies and cryptocurrency investments are available through MoneySense's consumer alerts.