Wild boar drags victim for a metre in Punggol attack

Paramedics at the scene of the incident where the wild boar attacked the woman and bit her left leg.

A woman armed with an umbrella teamed up with two men to rescue another woman who was being attacked by a wild boar in Punggol last Saturday evening.

Even as they tried to beat it away, the animal continued to grip the woman's left leg with its sharp teeth and dragged her for about a metre before releasing her and fleeing, said one of the rescuers, who wanted to be known only as Ms Chen.

She said she was watching television in her flat at Block 310A Punggol Walk at about 9.30pm when she heard screams for help from the foot of the block.

Ms Chen, a 45-year-old who works in administration, told Chinese-language evening daily Lianhe Wanbao that she looked down from her balcony and saw a wild boar attacking a woman on the road near the void deck.

She called the police and grabbed an umbrella for protection against the boar before rushing down to help.

"A middle-aged man who was washing his car also came forward to help. He borrowed my umbrella to hit the boar in an attempt to drive it away," said Ms Chen.

But the animal resisted and dragged the woman just as a food delivery man joined in the rescue by ringing his bicycle bell to distract the boar, which eventually ran away.

By then, the woman's left leg was a bloody mess. An ambulance and the police arrived soon after.

The Singapore Civil Defence Force told The New Paper yesterday that it responded to a call for assistance at about 9.30pm and took one person to Sengkang General Hospital.

Ms Chen told Wanbao about her concerns if wild boars were to attack children who attend a primary school near the scene of last Saturday's attack.

Read Also
Stray dogs cause cyclist to fall into drain 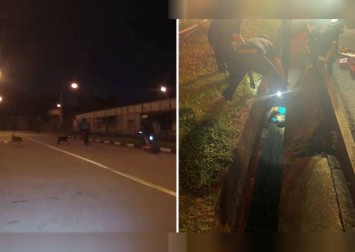 When TNP visited the scene yesterday afternoon, some residents said that while they did not witness the attack, they had read about it on social media.

Mr Tan Chin Yu, a 36-year-old wealth adviser, said that he was not home when the attack occurred and found out about it from a Facebook group post for Punggol Walk residents.

"A guy said he was parking his car when he saw the boar, but I am not sure what exactly happened," said Mr Tan.

He was worried about a potential safety issue as many children usually play around the estate including his daughter, who is six.

"My wife and I were just talking last night about needing to be extra careful when we take our daughter out next time.

"My wife also said she will be more aware when she goes out on her runs. You never know when something like this will happen to you," added Mr Tan.

Ms Rebecca Seah, 34, who also lives in Block 310A, was curious whether the woman had provoked the wild boar before it attacked her.

"It is definitely concerning. I am just wondering whether the (woman) had triggered the boar. Then again, you really don't know the nature of wild animals," said Ms Seah, who works in human resource. 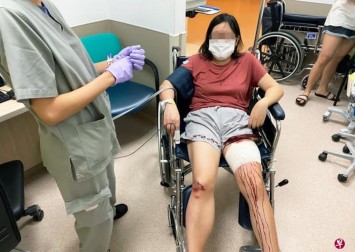 She was also not home when the incident happened.

"I heard (that the boar) dashed through the estate. Someone said the injury was quite serious and the lady's bone could be seen."

While stray dogs are often seen in the area, Ms Seah said she had never seen a wild boar lurking around before.

"I thought boars are usually around forested areas, not blocks like this. So this incident is really quite unusual."

As wild boar sightings became more common over the past year, Singaporeans have been constantly reminded to stay away from them and to refrain from feeding them.

Eight people were charged on Jan 13 for feeding wild boars near Sungei Api Api Park in Pasir Ris. This came after stricter laws were put in place on June 1 last year to deter the public from feeding wildlife.

Four of them pleaded guilty and were fined $2,500 each. The outcome of two cases adjourned to Feb 3 is not known, while the remaining two accused intend to plead guilty on Feb 24.

On Nov 17 last year, a 50-year-old woman was attacked by a wild boar at Sungei Api Api Park, leaving her with a 10cm-long laceration on her left leg as well as facial injuries.