Many of us have taken the wrong bus or missed a bus stop when we're distracted by our phones or nodded off after a day of tiring work.

What do you usually do after realising this? Get off the bus immediately, find an alternative route, and hurry home right?

Not for this female commuter though.

Facebook user Pravin Kumar uploaded a video on Jan 27 of a woman kicking up a fuss and physically blocking a double-decker bus from moving off, after realising she had missed her intended stop.

Last night when I was going home after a long day's at work, I had to encounter this irresponsible behaviour affecting...

According to Mr Kumar, the incident took place onboard bus service 43 which was bound for Punggol. The woman delaying the bus was said to be a Chinese national due to her accent.

Based on the conversations in the video, the female passenger claimed that she had informed the bus driver where she wanted to get off, which was presumably a stop before Payar Lebar.

She said that when they arrived at the bus stop, the driver told her she had not reached her destination, causing her to miss the stop. The woman was worried that by the time she returned to the correct bus stop, there would be no more bus service to take her home that night. 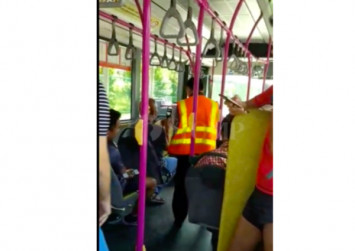 She then demanded that the driver do a U-turn back to her intended bus stop, Mr Kumar wrote, despite repeatedly being told it was impossible. The agitated passenger then proceeded to disembark and stand in front of the bus to prevent it from moving away. She was also insistent on lodging a complaint against the bus driver.

In the 4-minute-long video, other commuters could be seen trying to reason with her "for being a public nuisance which she opted to totally ignore," Mr Kumar wrote.

She later boarded the bus again and continued to scold the driver. Towards the end of the clip, other passengers in the bus were seen alighting due to the hold-up.

As of Monday afternoon (Jan 28), the video has garnered over 760,000 views and 16,000 shares with many of the 800 comments slamming the woman for her selfish behaviour.

Meanwhile, other Facebook users were more understanding of her situation.

The incident eventually ended when two passersby managed to convince her to get off the bus and help her to get to her destination.